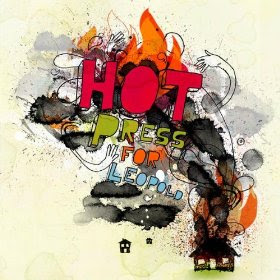 Los Angeles, California’s Hotpress For Leopold is what happens when you give a composer free reign to create what he wants how he wants. Omar, whose last name appears to be a secret, has placed music in television and movies at a consistent pace over the years, but touches down on a composer’s dream on Hotpress For Leopold.

Hotpress For Leopold opens with Can't Stop The Bomb, a realistic if somewhat morbid take on the one potential end for humanity. This apocalyptic monologue is set against a wonderfully peppy composition that combines Classical and Pop/Rock elements. The result is wonderfully bizarre and sort of inspiring. Torturer (Rock Mix) finds Rock guitar in cohorts with Glockenspiel, Trombone, Flute and drums to create one of the most unique sounding Rock tunes of the year. The melody of Torturer will paste itself to the underside of your subconscious and haunt you for days. You Weren't Exactly A Saint is a song I've had on repeat for sometimes as much as an hour at a time. Elements of 1950's and 1960's Rock, Queen-style glam and a theatrical hubris combined with a melody that just won't quit make this perhaps one of the best songs of 2009.

Hotpress For Leopold slows things down a bit with an instrumental entitled Fish Market that sounds a lot like something the Trans Siberian Orchestra might come out with. Barn Burner takes more of a 1960's Folk-Rock tune but with modern elements. The arrangement is unique and bit peculiar but a highly enjoyable listen. Two Ships is a melancholy and vaguely mournful song about missed opportunities. The melody line and harmonies here are gorgeous. Omar has been great on vocals throughout the album, but particularly shines here. Don't Be Afraid is done as a 1980's New Wave Pop tune, and would likely have charted if it were released around 1985. Hotpress For Leopold closes out with Drinking Song; sounding like someone took circus music and superimposed it over a folk tune. The result is better than you might think, although quite busy and challenging if you dig into listening below the vocal line.

Hotpress For Leopold is practically indescribable. Atypical instrumentation and a menagerie of musical styles pushed together with the appropriate pressure produces a gem. Hotpress For Leopold may not be for everyone, but the album is done with such humor and glee that you can't help but catch the bug. With radio programming so compartmentalized it's hard to imagine where Hotpress For Leopold might fit in. College radio is always a possibility, as is NPR, but something this good has to find an outlet. Make sure you spend some time getting to know Hotpress For Leopold. There really is no one quite like them!
Rating: 4.5 Stars (Out of 5)