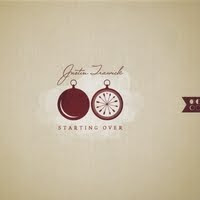 Justin Trawick - Starting Over
2009, Justin Trawick
Washington DC based singer-songwriter Justin Trawick gets point for making lemonade. Trawick used the loss of his 9-5 job as impetus to pursue music full time. His brand of Rock/Folk/Americana has seen him gain a lot of attention on his local music scene and even garner high praise from such sources as The Washington Post and NPR's All Things Considered. Trawick's debut EP, Starting Over features 5 songs focused on transitions and the twists and turns that life sometimes throws our way. Trawick has already opened shows for groups such as Cowboy Mouth, Bob Schneider, Edwin McCain, The Gourds, Jill Sobule and Pat McGee; it's only a matter of time before he's headlining the same stages.

Starting Over gets going with Snow Angels, an Americana tune about a breakup that illuminates the pain against the happiness of past events. The song has great rhythm and movement; it sticks with you. French Fries And Gravy is a conversation; a search for new paths and a desire for familiar landmarks. I really like this song; it's a palpable story that makes sense without deeper thought, but there's also a lesson in here about the contrasting aspects of human nature that want the greener grass but also the comforts of home. The arrangement is perfect, almost lilting, and Trawick handles the vocal masterfully. Untitled details a relationship where the protagonist is not on equal romantic footing with his partner; the doomed relationship comes to the expected end while he still pines for a second chance. Moving On is my personal favorite track on the disc, a wild, barely staying on the rails bit of Folk and Rhythm And Blues about people's tendency to talk first and think later. The arrangement is well done with the same sense of reckless abandon implied by the subject. Trawick closes with Starting Over, which was written just days after Trawick lost his job. Trawick speaks candidly in the song about the twists and turns of life and his desire to get back on a path.

Justin Trawick is above all else a songwriter. He spins yarns in comfortable Folk/Americana arrangements that smooth the listener's path into the deeper meanings that lay behind his songs. Trawick's biggest influence is Bob Schneider, and it shows a bit in his songwriting style, but Trawick maintains his own voice throughout Starting Over. I expect big things to come from, and for, Justin Trawick.

You can learn more about Justin Trawick at www.myspace.com/justintrawick. You can purchase Starting Over as either a CD or MP3 at CDBaby.com.
Posted by Wildy at 5:20 AM

great review! i think one of the coolest things of Justin-along with his music is his ability to connect so well with his audience. I am always surprised when he asks for my opinion on songs, videos or pics---however i'm very happy to see an artist with such a dedication to get to know the thoughts of those who enjoy his music and performances.

he also brings together other musicians in a way that encourages exposure and opportunity to attract new fans.

lastly justin def. gets kudos for his ability to be all over the place at once. when you go to his website- the amounts of places on the web you can cross paths with justin are impressive!

i can't wait for the day when i can say...i knew justin when.... (i on bike and he on long board trekked from the kennedy center to E street cinema in DC in 25 mins.)