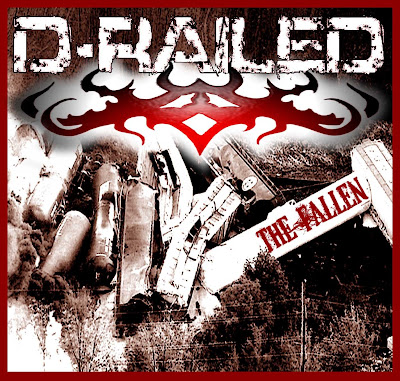 D-Railed is an Alternative Metal band from St. Louis, Missouri that's creating quite the buzz far beyond their local market. Deals with Code 5 Records and MTV Studios, as well as endorsements from Washburn Guitars, Spector Basses and Hartke Amps mark D-Railed as a band on the rise. D-Railed's most recent project is the three song single, Fallen.

The Fallen opens with the title track, a stark modern rocker fueled by a vicious bass and the splendid voice of Tim. The composition here is outstanding, from the bass calisthenics to the vocal harmonies and guitar work. Frontline looks after the effects on individuals of being in battle in vivid terms. The song calls out those in power for putting soldiers in situations that may alter them for the rest of their lives. Gone is a decent tune full of a lot of tension and some serious screaming that runs counter to Tim's lead vocals, but dynamically just doesn't quite stand up to the first two songs on the single.

D-Railed can rock, based on the short sample of songs we heard on The Fallen. Their sound blends Hard Rock and Metal with some of the more Emo tendencies that run through a lot of new "core" genres, establishing D-Railed as sort of a generational bridge between old and new styles. We'd like to hear more to see where D-Railed is headed, but this is a great start.
Rating: 3.5 Stars (Out of 5)

You can learn more about D-Railed at www.myspace.com/drailedinstlouis. No purchase information for The Fallen could be located on the web. You can stream songs about D-Railed’s MySpace page. Message them there for information on how to acquire the album if you’re interested.
Posted by Wildy at 5:40 AM

Thanks for the article - currently writing one myself on D-Railed so this was very helpful. Take care, Andy @ www.an-unknown-artist.com