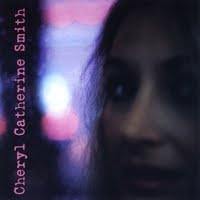 Cheryl Catherine has the sort of back story that speaks of urban legend, mythology and hearsay, yet I am assured it's all true. A father who may have been part of the Mafia in New Jersey drove to Vancouver to see his two children when Smith was eight. The next day he was found dead. Smith's life spun slowly out of control from there. Smith frantically searched for meaning and purpose, trying everything from modeling to religion to drugs. Personal tragedy (rape) and success mixed in a whirlwind leading up Smith's own suicide attempt. Somewhere in there Smith came to terms with her own path; since that time the creative possibilities in her music have opened up a whole new world for Smith, who has been compared to Pat Benetar, Pink, Leonard Cohen and even Bette Midler. Smith's self-titled debut CD, released in 2008, is starting to gain serious traction in Canada and the United States, even garnering airplay in the UK.

Opener All Dark Places is set to a dance beat and speak of the void in anyone who has been hurt that waits for love to fill it. The vocal is lush and entrancing with a rocker edge to it. This will be the second single in the US and has serious commercial potential. Smash Up My Telephone opens with a talk/sing introduction before heading into a lyric bridge and a guitar-heavy chorus. This is another tune with real potential commercial impact. It's just off the beaten path enough to stand out and finely crafted enough as a Pop/Rock song to swim with the big musical fishes. Why Does She Hate You has already earned status as a moderate radio hit in the US. It's a driven rock song that calls to a cross between Pat Benetar and Patti Smyth. With the right push from a label this would easily be a top-10 single. It's that good.
Smith heads for deeper waters on My Body Bends, a song about the sort of insecurity, fear and plain that leads some to the point of ultimate decisions such as suicide. The song is shocking in its presentation, sounding otherwise like a 1980's Pop/Rock song. Pardon Me is a protest song of sorts against the power brokers of the world. It's spoken word over ethereal keyboard and a heavy, slow rhythm. It may be Mother Nature speaking or some other goddess figure but could just as easily be any deity you choose. I Am Strong is done as a country tune about getting out before things fall apart. The song appears to be written from the perspective of someone afraid of things working out rather than of them falling apart. It's great writing, fully in character and in situ. Time Is On My Side is a radio-ready Country/Rock anthem about believing in yourself. This could easily become the theme song of a television show and could become an anthem for all those striving to make their dreams come true.

September Morning addresses growing up and beginning to see that all the things that looked black and white at 18 are really all different shades of grey. This is a theme that has been done many times over in popular music, but Smith avoids cliché and creates a cogent and poetic pop song. Superhero walks the line between love song and best friend song; it could be read either way. Regardless of your reading this is a classic pop tune with serious potential for licensing and an outside chance of breaking at radio. It's a catchy melody, a solid and well-delivered subject laid out in poetic language and a steady pop beat that leaves it open to dancing. This is real mix-tape material and an instantly likeable tune. Smith heads back to the Country sound on Let Sleeping Dogs Lie; singing in the warm alto part of her range and letting herself go completely in the singer/songwriter pastiche she's so good at. Smith closes out with the Rockabilly/Rhythm N Blues On My Way; an acknowledgement that in spite of whatever has come before Smith is heading toward her dreams. It's a song that most working musicians can identify with. It reflects confidence and belief in self and is done with an almost magical touch on lyrics.

Just read the review. Great that someone was able to put into words what I felt, just listening. Fabulous music - high energy performer if you ever get a chance to see her live! Check out her website! Great stuff!