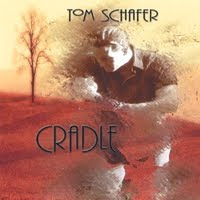 Tom Schafer is New York City born but currently resides in Cooper, Florida. He's an Americana/Blues singer/songwriter with a penchant for Springsteen-esque lyrics and presentation. His album, Cradle, is full of pragmatic, working class observations about love, life, faith and the illusions we gird ourselves in. His music has been played on the airwaves in Florida, on various stations around the US and as far away as Paris, France.

Schafer opens with the title track, a rollicking bit of acoustic Rhythm & Blues with some blistering guitar work. Schafer has a down home, comfortable voice; a bit gruff on the edges but an everyman's voice that fits perfectly in the songs presented here. At seven-plus minutes, Sweet Lullabies overstays it's welcome by a good three. It's not a bad song - it's all about finding someone; it's just done in such deliberate fashion that you'll find yourself reaching for the skip button. Kross By The Road runs into similar difficulty, clocking in over eight minutes in length. The song explores the sorrow, loss and elements of faith of an unexpected tragedy. Schafer runs around his subjects almost endlessly, settling closer and closer to the heart of the matter with each go-round. His stories unravel like an onion is peeled; tiny later by tiny layer. For the listener this is a mixed blessing. Just as brevity is the soul of wit, it's also the key, at times, to a positive listening experience.

Schafer gets pensive on Sweet Dreams For Brigitte, a sleepy but inspired bit of jazz guitar noodling that turns into an ode to William Ackerman without the funky guitar tunings. It's an unstructured tune, sounding perhaps improvised at times, but Schafer returns to the jazz foreground where he started out and ties it all up quite nicely. Schafer heads off on another epic composition with Ain't That A Shame. It's a quasi-free form guitar experience with a bit of an Elvis Presley vibrato in the vocal. At six-plus minutes this one becomes a difficult listen. In the midst of all of this creative over-exertion comes two-and-a-half minutes of musical magic in Sweet Lady. Schafer finds the perfect mix of words, brevity and melody in a love song for the ages. Treat Me So Bad is built around some impressive blues guitar work. Lyrically the song is a bit difficult to follow, but musically it's top notch. We get a taste of Schafer's live sound on Knife Hangs On The Fence; a sound that doesn't vary significantly from his studio sound. This actually isn't a bad song, but you'll spend a lot of time trying to figure out just what, exactly, he's singing. Cradle ends with This Little Prayer For Gigi, a solo guitar piece that flows with the slow and deliberate nature of a nascent stream. It's pretty but that's really about all that can be said.

Tom Schafer is, above all other things, a talented guitar player. He can create musical tapestries with six strings that are entrancing, but he also is restricted by his lack of limitations and boundaries. Cradle is all Schafer all the time, and the end result is a highly insular recording that can feel exclusive even to the listener. Schafer is in his own world, musically, creating whatever he wants whenever he wants, but often becomes so bogged down in his creative need that he doesn't seem to know to get himself out. Consequently many of the songs here go on long after they've exhausted their contextual or musical message. Vocally, Schafer is interesting to listen to. It's not a pretty voice, but one you can enjoy; but lyrically he can tend to get repetitive and unfocused and dance around a subject long after the listener's interest has waned. Cradle is an album with some strong qualities and some strong liabilities. There's a lot here for the taking; it's a question of whether you are willing to wade through the rest. Those who enjoy free-form guitar play will definitely enjoy Schafer's instrumental aspect.

You can learn more about Tom Schafer at http://www.tomschafermusic.com/. You can purchase Cradle as either a CD or download from CDBaby.com.
Posted by Wildy at 5:00 AM