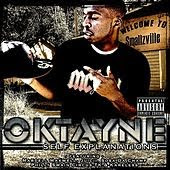 Rodeo, California’s Oktayne has a plan. Not one for simply thriving on a dance beat, Oktayne raps and rhymes about whatever is on his mind, whether it’s dreams of being a rap star, social issues, having fun and partying or even bringing a little Barry White smooth to his rhymes. Born in 1987, Oktayne has deep respect for the history of hip-hop, with influences including Ice-T, 2PAC, Jay-Z and Nas. Oktayne’s debut album, Self-Explanations, was released in 2008, and continues a slow-but-steady build in internet buzz.

Self-Explanations opens with What I Am, a declaration of self in song that's fairly stereotypical for Hip-Hop/Rap. The rhymes here are strong but Oktayne doesn't really offer much that's new or interesting. Hat Game is a bit perplexing. I had a hard time figuring out whether Oktayne is praising the trend of wearing/collecting different team hats or making fun of it. On one hand there's a fair amount of sports knowledge and love expressed by the song, but there's also a tendency in the song to change teams like the wind depending on whose winning. I Am Tayne is a much better intro song that the opening track. Oktayne gives you a look at who he is and why. Unlike a lot of popular rap artists who might decry the world for their own betterment, Oktayne gives the impression that he lives for the music itself.

Oktayne takes some time to praise the fairer sex on I Wanna Be High. Barry White smiles benevolently on this song as someone finally figures out how to bring the slow jam vibe to a rap song and does it right. Oktayne is a student of Hip-Hop as well as a performer, and pays tribute to its Soul and Funk roots on California Soul. Oktayne distinguishes himself in the Rap world with Neva; a gooey love song that says all the right things about love, commitment and family. It's a positive image that is often left aside in popular rap. Sexademic, however, could have been written by Luke Campbell himself. Fans of old 2 Live Crew material will love it.

Juicii shares mic time on Till The Sun Up; an entertaining if highly charged song about sex. I guess it's no good being a rap star if you can't brag about your prowess a little. Sosa The Champ sits in on Hold It Down, a great danceable song with real commercial possibilities. Sex appeal and dancing come together on Fast To The Ground, where it's all about the booty. This should score big for Oktayne on the club scene. There's real potential here. The dance-oriented material continues on Leaving With Me, although this tune is a bit more bland. Oktayne gives listeners a tour inside his mind with The Dreamer, a song about striving for what you want; growing up and taking responsibility for your own destiny. It's a hungry song; a positive message from someone who perhaps hasn't gotten where he wants to be yet but is certainly on the right path.

Oktayne scores major points on See You Again, a touching tribute to his aunt and uncle. See You Again is extremely well written, having a strong narrative that illuminates his loved ones quite well; it's very apparent how strongly he feels and yet done without sounding cliché. Oktayne closes out Self-Explanations by calling his own generation out for their lack of direction and seriousness on Focus. He reaffirms his own drive to succeed and calls on others to take their lives in their hands. This is one of the more energetic performances Oktayne gives on the CD and is my personal favorite.

Oktayne scores big with Self-Explanations. I thought the dance/club material was the weakest on the disc and yet still scores decent marks for quality while providing some of the most marketable songs on the disc. Oktayne is profane at times, but poetically say; he's got a lot to say. While the delivery might not always sit well with all listeners, there's always a dash of good humor in Oktayne's voice that makes even the most difficult of messages go down easier. Self-Explanations has flashes of the poetry of 2PAC, a pop sensibility that Kanye would be proud of, an occasional killer lyrical instinct in the vein of Ice-T and a whole lot of Will Smith's good guy machismo all wrapped up together. Oktayne has a great start here, and he's only going to get better.

You can learn more about Oktayne at www.myspace.com/therealoktaynepage or http://www.therealoktayne.blogspot.com/. You can purchase Self-Explanations digitally via iTunes.
Posted by Wildy at 5:00 AM