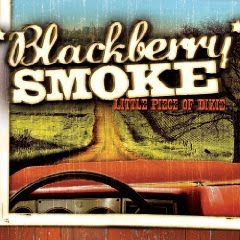 It's now the end of September, 2009, and I have been waiting all year for a truly kick-a$$ rock album to cross my desk. We've had some decent efforts; albums with strong songs but nothing that really melts your face from the opening chord to the last faded rhythm. Until now. Atlanta's Blackberry Smoke releases their sophomore album on September 29, 2009. Little Piece Of Dixie rocks hard with country and blues riffs and a southern fervor that hasn't been seen on the rock scene in close to twenty years. This is outlaw country, Rock N Roll style, and if you get in their way you'll be swept up in the musical powerhouse that is Blackberry Smoke.

Little Piece Of Dixie opens with Good One Comin' On, the ultimate Rock N Roll weekend party song. If you pine away all week for that first beer on Friday night then this one is for you. Charlie Starr's voice fits perfectly into the band's sound, and the energy never wavers. Like I Am is a classic theme with a twist. Can you love me like I am? It's very well written with Country and Blues informing the heavy rock sound. Bottom Of This is dark and virulently catchy; a guy's tune, to be sure, but it might just help rekindle a lost genre, Hard Country. Up In Smoke sounds like a song you just need to hear live. It's incredibly catchy with thrilling guitar work, and very danceable.

Who Invented The Wheel is a classic. The narrator here is looking for anyone to blame for the downfall of his relationship. Anyone but himself, that is. This one will play well to commercial radio because we've all been there at one time or another; the theme is universal and the arrangement is flawless. I'd Be Lyin' takes Like I Am a few steps further in a highly entertaining bit of Outlaw Country-Rock. Here the narrator tells you not only what he's like, but also things that he's done, thought or said. Blackberry Smoke has a great populist theme for troubled times in Prayer For The Little Man. The sound here is toned down more to the country side, and would likely play well on Country radio. Never ones to rest, Blackberry Smoke jump right back into the heavy rock sound with Restless. This is a tune about a guy whose appetites are out of control, and is well captured in song. Shake Your Magnolia is a catchy Country-Rock tune that could cross over genres and would be a strong commercial candidate for Country Radio. Blackberry Jam closes out with Freedom Song, a fun extended jam with a little bit of Grateful Dead (on steroids) in its ancestry.

Blackberry Smoke knows how to rock. What's more, producer Dan Huff (Megadeth, Bon Jovi, Keith Urban, Rascal Flatts) has managed to capture the raw energy that fills Blackberry Smoke's live shows on Little Piece Of Dixie. This might just be the best pure Rock N Roll album of the year, and it should be in the conversation on the country side. Expect Blackberry Smoke to be all over the radio this fall.
Rating: 4 Stars (Out of 5)

You can learn more about Blackberry Smoke at http://www.blackberrysmoke.com/ or www.myspace.com/blackberrysmoke. Little Piece Of Dixie drops September 29, 2009. You can pre-order the CD through Amazon.com. Expect wide availability in both digital and traditional formats.
Posted by Wildy at 5:25 AM