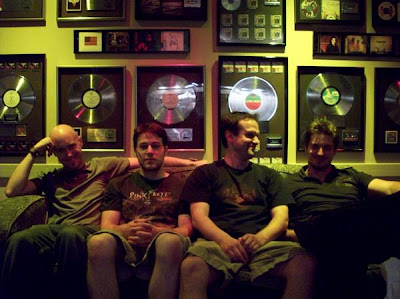 The Spies - Televolution
2009, The Spies

Los Angeles quartet started out as a collaboration between long-time friends Leo Francis (guitar/vox) and Mark Matkevich (piano/keys/guitar/vox). With the additions of Adrian Barrio (bass) and Dylan Giagno (drums), The Spies have come into their own. Their sophomore album, Televolution, finds the band with a new rhythmic stability that was at times lack on Old Ghosts (debut).

Televolution opens with the tasty Pop/Rock nugget Bang, Bang; a highly danceable tune with a beat that's irresistible. This is the perfect way to kick off the album before moving into the slightly darker Televolution, which talks about the revolution being televised and out there before the world. While it lends the album its title, Televolution is probably one of the weaker tracks on the disc. National Pastime, on the other hand is probably one of the strongest. It's very well written with a catchy beat and a hook that's worth its weight in gold. You Got Some Nerve takes a little side trip in a slinky rock arrangement with an almost creepy keyboard part. This is a song that's likely destined to be licensed for a movie to television soundtrack; it's too good and too situational to be ignored.

Paper Trail is an ode to all those who have to "sweat it out", or work for a living. This sort of song generally only comes from a band with working class roots; it's well done Rock with an Americana touch and is likely to be a big concert favorite. Modern Oceans is a catchy bit of Folk/Pop tune that sounds like something Barenaked Ladies might have done for Maybe You Should Drive. The song itself is about folks who leave their worlds behind to help the less fortunate (i.e. missionaries, be they secular or otherwise) and the difficult tasks they face. The song is a little vague on details but is a pleasant listen. The Spies slow things down for Lavender, taking on a sleepy, melancholy feel in a song that gets a bit bogged down in its own quietude but ultimately breaks free in a brilliant bridge. Televolution does anything but fade to black with It Comes In Waves, the final track. The Spies go out like they went in; roaring and making you want to dance. It Comes In Waves seems to recall a relationship lost, but the music is so jubilant you can't be sad.

The Spies made a very strong first impression with Televolution. They range from ultimate Pop/Rock dynamos to melancholy wordsmiths and back during the course of the album, ending with an occasionally uneven but ultimately satisfying disc. There's some real songwriting talent here, and a knack for the big hook. To top it off, Leo Francis has a voice that's vaguely reminiscent of Elvis Costello in his heyday. That's not a bad trio of traits to have going for a band.
Rating: 3.5 Stars (Out of 5)

You can learn more about The Spies at www.myspace.com/leofrancis. You can download MP3’s of Televolution through the band’s MySpace Page. CD’s are available, but no online outlet was noted at the time of this review. Try messaging The Spies through their MySpace page for CD copies.
Posted by Wildy at 5:40 AM