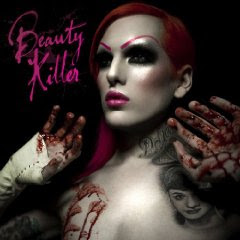 Jeffree Star started out as a model and makeup artist with an obsessive love of music. His early attempts at songwriting were more of an offhand experimentation than a serious attempt at song craft, but Star has a certain flair for the dramatic that comes through in his music. Working with various Los Angeles producers, including Lester Mendez (Shakira, Jessica Simpson, Nelly Furtado) and Luke Walker (Alkaline Trio, Elliott Yamin); Jeffree Star has created Beauty Killer; a collection of twelve highly danceable songs full of pathos and promise.

Beauty Killer opens with Get Away With Murder, a musical promise or threat from a narrator who is imbalanced and pathologically unable to maintain relationships. Set to a killer dance beat, I suspect this tune will be huge on the club scene. The first single, Prisoner, received upwards of 500,000 streams its first weekend on MySpace and seems certain to propel the initial sales of Beauty Killer to stratospheric heights. It's heavy Rock/Electronica that's certain to make an impact on the dance charts and in the clubs. Louis Vuitton Body Bag features Alkaline Trio's Matt Skiba helping out on vocals, and stands out as perhaps the best dance track on the album in spite of the dark content. Electric Sugar Pop slows the tempo down a bit but not the infectious nature of the song. This is bubblegum pop for the electronic music age, but it's very good by both accounts and may have the biggest potential as a Pop single of anything on the disc.

B!tch, Please is one of those songs where fame or infamy is the ultimate question (and ultimately, are they different?). Pat Robertson had a tremor when this song was first written and had no idea why. Lollipop Luxury (with Nicki Manaj) and Get Physical stay on pretty much the same course, whereas Fame & Riches, Rehab B!tches brings a little bit of emo/hardcore scream into the dance realm and features Breathe Carolina. Star closes out Beauty Killer with a pair of add-on tracks, Fresh Meat and Queen Of The Club Scene. Both have the feel of filler as they lack the intensity of much of the album.

Jeffree Star's Beauty Killer will be a big winner on the club scene; likely to be more popular in Europe than in the US. The material is somewhat one dimensional like a lot of pure Dance/Pop, but will score points for shock value on some songs for folks who prize that sort of thing in their music. I thought it was a decent listen; not something I'd feel compelled to spin again personally, but I can see the draw for the clubbers.

You can learn more about Jeffree Star at www.myspace.com/jeffreestar. You can purchase Beauty Killer at Star’s web store, or you can download it through iTunes. If you purchase the CD, you’ll get a signed poster from Star while supplies last.
Posted by Wildy at 6:17 AM