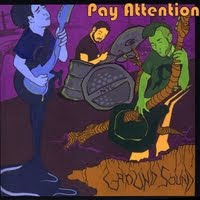 New York City’s GroundSound mixes up Funk, Blues and Rock N Roll in fiery fashion, revving up crowds in the Big Apple and its environs. Their debut album, Pay Attention, mixes Power Trio edge with danceable original songs that leave you wanting more. Brothers nEko Soto (bass) and Ray Soto (guitar) blend their talents with drummer Jon Carlucci have played around the Northeast US and have even gigged in London, and they’re just getting started.

Pay Attention opens with Funky Junky, a hyped-up bit of Funk Rock that will have you reaching for your dancing shoes. The song is a bit limited lyrically, but that really isn't the point with a song like this. This is good, old school Rock N Funk party music. Fix Me is a funk-filled diatribe about societies tendencies to find an easy way to resolve all problems with drugs, and a media environment that constantly reinforces everything that is "wrong" with us. The points are well taken but if GroundSound were to get any more subtle here they'd be driving a train. Zombie takes a turn toward 1970's AM Rock, with an easy listening vibe and funk groove underneath that sounds very old school. I suspect that live this song opens up even more and could turn into one heck of a jam piece.

Pay Attention stays with a straight-up funk feel, while Get Better (my personal favorite track on the CD) takes on a heavier aspect, mixing with the Funk and Blues of early-70's Hard Rock. New Orleans is hard to read: part tribute, part travel brochure and part asking what all the hoopla is all about. I think there was a point in there somewhere but it wasn't clear. Blinds Close seems to be about the lengths people will go to protect their world views in spite of any and all evidence that is contrary. GroundSound surrenders to the Funk once again, if briefly, on So You Know, a great bit of danceable Rock N Roll. Chunka Funk finds GroundSound rolling into an easy Funk/Soul patois that is appealing. The Lake Song goes more for a classic 1950's and early-1960's Rock sound before closing out and laying down the Funk hammer on Trip.

GroundSound is fun as long as you don't listen too deeply. There's not a great deal of refinement to the songwriting, which has an almost punk aesthetic, but GroundSound sure is fun to listen to when they're on their game. This is the sort of band you'd gladly plunk down some cash to go see on a Saturday Night and dance the week away. Pay Attention is the disc you take home and maybe listen to leading up the weekend. It's not groundbreaking, but it will definitely get your feet moving.

You can learn more about GroundSound at http://www.groundsound.com/ or www.myspace.com/groundsound2213. You can purchase Pay Attention as either a CD or download at CDBaby.com.
Posted by Wildy at 5:10 AM

Hey!! Thank so much for this review! We love it so much. We are working on new material and I really hope you enjoy it.- GroundSound