Review: The Old Man And His Po' Buckra - Taxes 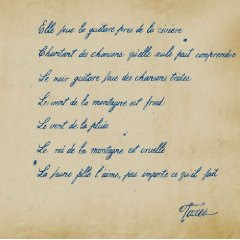 The Old Man And His Po' Buckra - Taxes
2009, Ever Reviled Records

The Old Man And His Po’ Buckra is a Jersey City, New Jersey band with an unusual presentation and an anachronistic sound. With a growl that makes Leonard Cohen sound like a lyric tenor, The Old Man expounds on the darker side of life on his debut album, Taxes. Like a John Carpenter film or a vicious car wreck, you’ll find yourself wanting to turn away but unable to. The Old Man is not easy on the ears, but he gets under your skin.

Taxes opens with The Great BaBu, a disturbing tune that has an almost ceremonial beat to it (laid down by Aphonia's Gregory Szaro). The Old Man growls his vocals in an atonal speaking voice like an adenoidal Crypt Keeper with laryngitis. Who's Your Friend finds The Old Man's voice balanced out by Aphonia's Zeena Koda, who's voice is as warm and sultry as The Old Man's is rough and creepy. The song isn't verbose, essentially repeating the "Who's Your Friend In Need" line. Monkey Paw, an obscure reference to a sailor's knot used as a hand-to-hand combat weapon in the 19th century is equally verbose. It's a rather odd tune that I still don't quite have the point of, unless it's simply a brief expression of the idea of "when they hit you, hit back". Sweets Rot The Teeth again features Zeena Koda on harmony, or more accurately, melody vocals. It's a song about coping with heartache and loss; in this case the preferred method is a bottle of whiskey and a rocking chair.

In Love With The Devil is a promising musical arrangement, but loses out on the croak and groan of The Poor Man. This is perhaps The Poor Man's best songwriting on the disc, but his gravelly croak just loses its luster after a few songs. Zeena Koda saves the song to some degree, but she's not the one in front for most of the song. Do What The Lord Said sounds like advice from a father who feels he is already lost to depravation to his child whom he hopes to save from the same path. It's an interesting bit of songwriting that continues to sound better in the hands (or vocal chords) of Zeena Koda, but is probably the most enjoyable song on the disc. The Old Man closes out with Stanley Jean is a tune about revenge that doesn't work quite how the narrator might have planned it. It's an interestingly dark coda for the album and ends as abruptly as you might expect.

The Old Man And His Po' Buckra is bound to be an acquired taste. The songwriting is better than you might suspect, but the delivery of The Old Man is a novelty that will wear off quickly. Think of it as coffeehouse folk for the Emo/Mathcore/Metal set. The songs take on a completely different life when Zeena Koda steps in on vocals, and would perhaps be better served with her in front. Nevertheless, it's an interesting record. Give it a try. Don't be surprised if you don't like it. But don't be entirely surprised if you do.

You can learn more about The Old Man And His Po' Buckra at http://www.thepobuckra.com/ or http://www.everreviledrecords.com/. You can purchase a copy of Taxes from Amazon.com.
Posted by Wildy at 5:10 AM