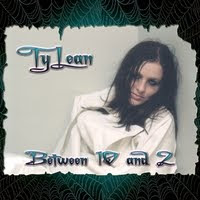 On TyLean's sophomore album, Between 10 And 2, you will encounter madness in its most integral form. TyLean mines personal experience and a childhood that could be a movie of the week to skate the edges of madness before the ice cracks and the white insanity consumes her completely. Imagine Tori Amos in a schizophrenic fugue and you might have an idea of what awaits you. TyLean broke onto the music scene in 2005 with her EP, When All Else Fails, and is currently wrapping (The Unforgivable, The Unforgettable) an album that recalls her tortured childhood in rural Pennsylvania in vivid detail. These days the singer/songwriter/composer is living in London, where she continues to score soundtracks for short films and documentaries while preparing for an Australian tour.

Between 10 And 2 opens with The Last One Awake, a recording of the signoff message used by television stations in the US in the 1980's. This is a mark of sanity (or the end of it), as night takes over and hallucinations break through in Corner Of My Eye. The comparisons to Tori Amos are notable here, although TyLean travels further off the chart of madness than Tori's faeries ever took her. There's a frightening beauty here, ensconced in a mix of horror and madness that's as compelling and needful as a bad auto accident. Rosalyn is a horror movie in song, complete with a squalling cello and a story-line that would be edited in newspapers to avoid horrifying the populace. Out Of Sight, Out Of Mind opens with a gorgeous Baroque-style piano and features an un-tortured vocal that reveals more of the beauty of Tylene's voice. There's also something hard in that voice; something that tells you things could go from beautiful to violent in a flash.

Distractions finds the narrator questioning why she has hallucinations. The arrangement is stark and compelling; not beautiful exactly but aesthetically correct; gothic in almost classical terms. Spiders could be either a hallucination or an allegory for the runaway thoughts that tend to accompany illnesses like schizophrenia. The lines between rational and irrational is blurred to non-existence in this stark musical monologue. TyLean even uses the music to help you hear the splits that happen where the narrator's mind dissociates from reality. Caught In The Web is a dark, minor-key instrumental played solely on pipe organ. It's not entirely clear what story element or mechanism this represents, although it's not uncommon for religion and fantastical thinking to mix in unusual ways in dissociative disorders. This leads into Misery, the closing track, a brief monologue from the mouth of madness that's steeped in allegory so deep it might take years of therapy to unwrap. The arrangement features what sounds like glockenspiel, bass and percussion, with a breakdown (both figurative and literal) coming at the end. The disc ends abruptly, leaving no answers, just questions.

TyLean's aural picture of madness offered up on Between 10 And 2 is as complete as our understanding of how the human mind works; that is, not very. We follow TyLean on a descent into madness, with no happy ending offered up to soothe the listener's psyche. This sort of highly provocative, discomfiting art generally has a limited demographic of consumers, but TyLean benefits from being a vivid and imaginative lyricist who can grab and hold your attention even while detailing the darkest aspects of the human condition. I was uncomfortable with Between 10 And 2, and yet I thoroughly enjoyed it. I don't suspect it's something I will listen to very often, but I will never forget it.

You can learn more about TyLean at http://www.tylean.com/ or www.myspace.com/tylean. You can purchase Between 10 And 2 as either a CD or download through CDBaby.com.
Posted by Wildy at 5:19 AM