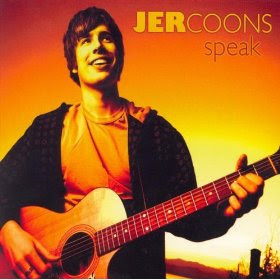 Jer Coons - Speak
2009, Jer Coons
Jer Coons is a twenty year old singer/songwriter from Vermont's Green Mountains who bucks local musical trends by trying to sound like himself rather than like Phish. Coons missed his first date with destiny after sleeping through his American Idol audition and so has turned to the Indie route to find fame and fortune. Coons' first full length album, Speak, drops on September 29, 2009, and features a brand of pop music that will seem instantly familiar. Comparisons have been made to John Mayer, Jason Mraz and Damien Rice (Mayer and Mraz make a certain amount of sense), but elements of Rob Thomas and Toad The Wet Sprockets' Glen Phillips also should be in the discussion. Whoever you might hear flashes of on Speak, there's no doubt that coons is very much himself.
Coons leads off with the title track, Speak, built on a catchy riff and a beat that will get your feet moving. Speak is the perfect first single; a song that will stick in your memory well after its done playing and make you want to find out what else he's got. Too often that first single can lead you to an album of mediocre material; not so with Speak. Coons delivers song after song. Legs slows down with some Jimi Hendrix inspired guitar work wrapped into an Acoustic Pop song with a Jason Mraz style lyrical density and a chorus that just melts over you. Legs is written from the perspective of the guy who lost out on the girl who's still very much stuck on her. It's a great big of songwriting that has major licensing potential written all over it. Girl In My Head is about waking up and realizing you've been spending too long waiting for someone who isn't going to come around. It's a great Pop/Rock tune showing a very mature perspective and deftly worded process.
Ceiling is all about the aftermath of a relationship that's fallen apart and has pop radio hit written all over it. Ceiling doesn't fall into the syrupy trap of self-pity, but has a distinct narrative that's involved but detached. This is the sort of tune you hear as an interlude in a movie when a relationship between two major characters has fallen apart or it at least in temporary jeopardy. You'll Never Know seems to address the doors we miss by failing to make good decisions; the story is told in the realm of a dysfunctional relationship that seems inescapable. Wait (Just A Little) is all about the hopeless hope that sometimes pervades the longer-term aftermath of a lost relationship. He's still waiting for her to come back even though she probably never will. This is all explained in a strong Acoustic/Pop arrangement with commercial bite. Coons closes things out with The Only Trace, a closing of the books and accounting of losses on the relationship Speak has been focused on. There's a deep seated yet unsure hope for something else to come along, but the narrator can't even imagine what that might be.

Perhaps the most remarkable thing about Speak as an album is that Jer Coons spends eleven songs dissecting a lost relationship with someone who was his world without ever asking for or engendering pity. There's an almost mercurial, academic air here that balances the longing that is so evident. From a songwriting standpoint this is interesting because it leaves Coons describing his emotional attachment without ever really showing it. The songs on Speak are well written, and the Acoustic/Pop arrangements go down like candy, but that disconnect can be just a bit unsettling at times. It makes sense in terms of self-protection, but gives the songs a Hollywood sheen that might undermine the meaning for some. Nevertheless, Speak is a very strong album that should have strong commercial impact for Coons.
Rating: 3.5 Stars (Out of 5)
You can learn more about Jer Coons at http://www.jercoons.com/ or www.myspace.com/jercoons. Speak drops on September 29, 2009. Look for availability through Amazon.com, iTunes and various other online outlets.
Posted by Wildy at 5:28 AM