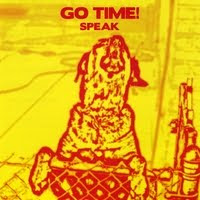 Chicago's Go Time! was born from the demise of longtime Windy City faves Prairie Town, coming together in October, 2007 with Prairie Towners Scott Niekelski (lead vox/ guitar); Mark Marketti (bass) and Steve Grzenia (drums) casting their lots together. Go Time! wasn't complete until ex-Cromulents and ex-One Million Monkeys axeman Paul Schmidt came along. 2009 sees the release of the debut album from Go Time!; Speak draws from the same well as fellow Mid-Westerners The Psychodots (aka The Bears); mixing a working-class vocal ethic with mildly crunchy rock tunes you can really dig into.

Speak opens with You Know, a relatively monochromatic rocker with a Lowest Of The Low guitar style and a mildly catchy melody. This is bar rock at its most essential; not highly memorable but good enough for a Saturday night. Rust To Rust picks up the pace a bit with an edgy guitar opening and a driving rhythm to kick things into high gear. Niekelski sounds a bit like Ian Anderson on vocals. This is an excellent tune, built on a melody you won't be able to shake and a compact, concise arrangement that keeps things moving nicely. My Suicide is a high-energy, upbeat song about giving up and walking away; more about change than death, the song is a thoughtful for a rock tune that features some killer guitar work. Too Far Gone has a classic Southern/Garage Rock sound, like something Skynyrd might kick around in practice.

Wait And See continues with the Southern Rock style in a catchy and solid tune that likely plays well in front of a crowd. The relationship angst here is a bit atypical for the style but works well. Hey Day breaks out the Rockin' Rhythm N Blues in a dark tune that sounds more like the Tragically Hip than anyone else I can think of. No Sense To Lend harkens back to the 1960's Folk/Rock scene with a tune that's a decent listen but doesn't make a significant impression. Just Don't Know Why, on the other hand, is highly danceable Rock N Roll that will have you up and moving before the intro's done. Cost lays it open with a bit of Guitar/Pop/Punk that's as fun to listen to as I'm sure it is to play. Imagine if the Ramones and The Knickerbockers jammed together; it might sound something like this. Go Time! closes out with similar energy on the guitar rocker Cut And Run.

Go Time! is a strong band with decent material and a fun and frothy Garage aesthetic. Speak is a fitting debut for a band that's steeped in the past but hasn't forsake the future. The melodies in here range from average to above average, and there's a distinct emphasis on structure (thanks to the rhythm section of Marketti & Grzenia) that allows the band to stay tight in spite of the Lo-Fi approach. Speak is worth checking out, although I suspect Go Time! has more impact live than comes across on CD.

You can learn more about Go Time! at www.myspace.com/gotimeband1. You can purchase Speak as either a CD or download through CDBaby.com.
Posted by Wildy at 5:10 AM