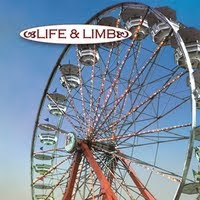 Life & Limb – Few And Far Between
2007, Whoa Nelly
Atlanta's Life & Limb bring a wholesome face to Rock N Roll. The easy-going quartet mixes the vibrant keyboard work of Bill Simpson with the vocals of Dave Kelly with Rob Schumann on guitar and Patrick Mueller on drums. Big rhythms and energetic instrumentation sans heavy distortion make for a fresh sound that plays well across generations and demographics. Life & Limb's debut, Few And Far Between captures this sound in the form of eleven original tunes you may want to spend some time with.
Few And Far Between opens with High Pride, a comfortable classic rock paean that sticks to cliché and popular symbolism and doesn't really say too much in the end. The song is a pleasant listen that will get you moving. Sweet Jesus hits similar musical grooves with a messianic message done in classic lines that have been sung many times over. Something's Wrong follows a slightly funkier path, mixing acoustic and electric guitar in layers to get somewhere in the Bruce Hornsby/Elton John range of piano dominated Rock & Pop. Kelly over sings his vocal line, bordering on caricature at times but remaining entertaining and engaged throughout.
My favorite song on the CD is Whoa Nelly, a romping good time of a Rock N Roll song with some serious piano work and a catchy if not radio friendly chorus. You'll be trying to shake this song for days after listening to the disc; be warned. Big E Vegas continues the ultra-catchy with big, vibrant piano parts trend; a close second for my personal favorite on the disc even if the chorus is a bit mundane. Cold is perhaps the most marketable rock tune on Few And Far Between, carrying the Grunge sensibilities to their logical conclusion in a gentle, slow-leaning Pop/Rock tune. This transitions into Head Above Water, which takes on a lot of the same characteristics of the songs that come before it: Rock N Roll pedigree with a Folk/Rock/Piano sound, a mildly catchy chorus. Few And Far Between closes out with All In Time, a honey-coated bit of Piano Rock that wends its way home through a slow, laborious arrangement.
Life & Limb seems to thrive on a familiar yet blandly non-descript songwriting style that's big on emotion and imagery but short on meaning. There are distinct Christian undertones that run through some of the songs on the album, but some of the language and content isn't consistent with a CCM release. There are a couple of songs here that I really enjoyed, but in general Few And Far Between just didn't make that strong an impression.
Rating: 2.5 Stars (Out of 5)
You can learn more about Life & Limb at http://www.lifenlimb.com/. You can purchase Few And Far Between as either a CD or download through CDBaby.com.
Posted by Wildy at 4:55 AM