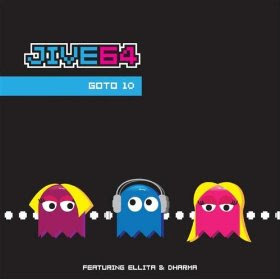 Very quietly, or perhaps not so, Tel Aviv, Israel has become a center for Dance/House music. Offer Nissim (Madonna, Donna Summer, Christina Aguilera) is at the vanguard of Israeli DJs and Producers starting to make their presence felt on the international music scene. Hot on his heels is Hashoeve DJ Roy Cohen, who recently released his debut CD, GoTo 10 under the name Jive64. Cohen has an impressive feel for rhythms and beats and a love of 1980's dance music and video games that inform his recording. Joined by vocalist Ella (Ellita) Tadmore and Dharma (host of MTV Select on MTV's Israeli broadcast), Cohen creates a fun and exciting listen that you can get into a serious groove with.

The album opens with GoTo 10, a title drawn from the Basic computer language that the first generation of home computer programmers learned in Grammar school in the 1980's. The song is highly rhythmic and repetitive, perhaps a bit of social commentary on the segmentation and rigidity of modern life. The song is very danceable. Truth Theme (It's A La La Lie Version) started out as a love song to Cohen's lover but turned into a coming out tune that sounds like it came right out of a Commodore 64. One Live Up celebrates Cohen's love of classic video games, using sounds from games of the 1980's interspersed in dance rhythms and even adding lyrics about the games themselves. Yes, it's a bit geeky, but anyone who spent hours of their youth in the 1980's pumping their allowance away at the arcade will likely get a kick out of this song. Love Like Melody is perhaps the most entertaining and danceable track on the disc. There's a light, airy feeling to this tune that just makes you want to take part of whatever party it inspires.
Summer Start (Extended version) is a song that Cohen created a few years back independently; the version presented here is a bit different, with a heavier Trance feel to the song that it originally possessed. Cohen is so on his game here that you'll find yourself dancing or tapping along even in spite of yourself. Jive64's cover of Kylie Minogue's Turn It Into Love is nothing short of inspired, nailing the pizzazz of the original with Cohen's own deft electronic touches. Jive64's Gotmelooking Remix of Beyonce & Jay-Z's Crazy In Love is a sure thing for the dance clubs. Cohen shows he has a real touch for this type of dance music. Jive64 closes out with a remix of Rufus & Chaka Khan's Any Love that didn't work for me as well as Crazy In Love but will still likely be a big thing in the clubs (if it isn't already).

Jive64, for me, is more entertaining doing the quirky electronic mixing inspired by the aural encyclopedia of the 1980's. The more modern stuff is well done but perhaps a bit too much like Pop music we hear every single day. Jive64 really shines on the retro material, where Cohen seems particularly inspired. GoTo 10 is a great effort. GoTo get 10. You'll be happy you did.

You can learn more about Jive64 at http://www.jive64.com/ or www.myspace.com/jive64band. You can purchase GoTo 10 as a download through Amazon.com or iTunes.
Posted by Wildy at 5:10 AM