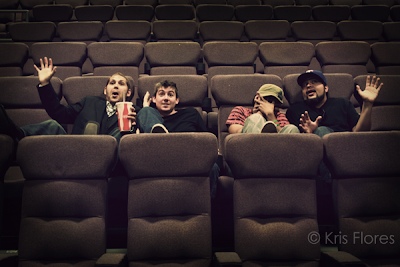 The Primary is a Dallas, Texas based quartet that’s been together since 2007. Active on the local club circuit, The Primary has experimented with numerous style and sounds (Pop/Rock/Jazz/Electronica/Classical) in their time together, mixing and matching sounds over time. That process of experimentation continues on their debut album, People Going Places.

People Going Places kicks off with Getting Strange, an oddly disjoined song that sounds like a mix of styles. There's a Police-inspired rhythm section including guitar, a vocalist who sounds like he's from the school of depressed New Wave Brit-Pop singers and a guitar player playing a counter-intuitive parallel to the vocal line. It honestly sounds like lines from two or three songs thrown together in a mix that doesn't entirely run afoul of the individual parts but never really gels. Exit follows a similar path, suggesting an Avant-Garde leaning in the band. Call Off Your Dogs I frankly didn't enjoy, although the song is built around a blistering guitar line that offers hope. The Primary mellows out a bit on For You, a dreamy pop tune that works well with Joshua Vasquez's voice.

You'll have to wade through A Life and Dear Old Friend to get to Heart Of Darkness, featuring a slightly heavier sound played in metronomic fashion. This is the best composition on the disc even as it ranges through experimental and psychedelic temperaments. The Primary closes out with The Last Breath, which returns more toward the morbid, droning side of the spectrum.

The Primary has an interesting sound that's quite unrefined and a bit too shoe-gaze without having any real driving force behind the songs. There's also a tendency toward over-filling the musical space that results in periods of sonic mess or sonic discomfort on People Going Places. It will be interesting to see how The Primary's sound develops over time. There's potential here, but they're still searching for their sound.
Rating: 2 Stars (Out of 5)

You can learn more about The Primary at http://www.theprimarymusic.com/ or www.myspace.com/theprimarymusic. People Going Places appears to be at the demo stage, with final mastering still to come, but watch for availability on The Primary’s website and/or MySpace page.
Posted by Wildy at 5:00 AM

Labels: People Going Places, The Cure, The Police, The Primary, The Smiths