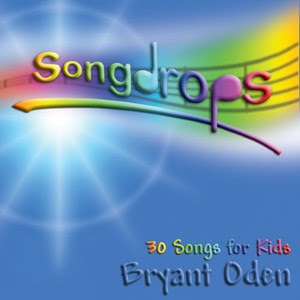 Bryant Oden followed the path many Indie musicians take; where music is a love, a hobby while careers are pursued; but sooner or later the artist must follow his muse. Oden has been writing songs since his teens both comical and serious. A native of Oklahoma, Oden moved to Denver after college to be closer to the mountains; his inspiration. With a Masters in Education Psychology, Oden has worked as a counselor, an ESL teacher in a high school and as an entrepreneur. Over the years he has entertained family and friends (and occasionally strangers) with his comical children’s songs. After hearing for the umpteenth time that he should record them, Oden set out to do just that in 2008. It appears that Oden has struck a chord. His The Duck Song has over 3.5 million streams on various media sites, while several other songs have over 100,000 streams each. On November 1, 2009, Oden releases his first album, Songdrops: 30 Songs For Kids. Kids love The Duck Song. Parents love The Duck Song. Will Songdrops deliver on its promise?

There are children’s albums for children; children’s albums for adults, and the best kind: albums so masterfully written that children and adults get them on different levels and both enjoy them. Listening to a group like Trout Fishing In America will give you an example of the latter. Such bands/albums are rarities as even the folks capable of writing them don’t nail them all the time. In his masterful and humorous creation, The Duck Song, Bryant Oden gets there for a shining moment. The album born from that inspiration, Songdrops, never quite gets there again. That’s not to say it’s a bad collection of songs, but Oden never quite hits that same level of divine inspiration on the other 29 songs presented on Songdrops. Ultimately, this is a children’s album full of songs that adults will think kids will think are fun or funny funny, but may have a hard time gaining much traction with the kiddos.

Oden opens with The Duck Song, a fine and funny song with a classic vaudevillian twist at the end; enjoyable for everyone. I Got A Pea is a cute song built around an age-appropriate double-entendre that will have the kids cracking up and will even bring a smile on the parents faces. Perhaps the biggest drawback to the album overall, a conceit, if you will, is the use of Chipmunks style vocal mixing on the album. It sounds as if Oden has sped up his vocal lines to raise the pitch of his voice, creating an Oden-on-helium sound with rapid-fire vibrato mixed in. It may amuse the younger set at first, but it becomes grating quite quickly and doesn’t really seem to serve any purpose in the long run. This shows through clearly for the first time on Songdrops, which is cute buy annoying because of the vocal thing.

I enjoyed Bob The Snail, an ode to an unusual pet, and I Love U (It’s My Favorite Letter) will get little feet moving, but it just doesn’t have that quality that will have your toddlers walking around singing it at the top of their lungs a few hours or days later (a mixed blessing). The Unfinished Song will bring you back to your Scholastic Book Club days with Madlibs set to music, but the song may well be over the head of the younger kids. Oden hits his best “serious” moment on Sing You A Rainbow, seeming to summon the spirits of Raffi and John Denver in a sweet moment that will appeal to the sentimentality of the Moms listening (and a few of the Dads). Oden may go over the line a tad for some parents on I Don’t Like Tomatoes; getting very close to something some folks may consider a hot-button word for your toddlers. That’s not to say there’s anything wrong with it, but there are some parents out there that won’t appreciate the humor on this one.

Oden is a humorous guy. He enjoys writing and playing for kids, and the songs are honest and well-intended. The quality is very much hit-or-miss throughout the album. The Duck Song is a classic, and there are a couple of other entries here that are very well done, but on the whole Songdrops leaves a lot to be desired as a children’s album. In the end I wouldn’t play it for my own kids, as after listening to folks such as Laurie Berkner, Trout Fishing In America, Elizabeth Mitchell and even The Smudge Fundaes, Songdrops just wouldn’t hold their attention.

You can learn more about Bryant Oden at http://www.songdrops.com/ or on Facebook. Songdrops will be released on November 1, 2009. Expect availability on iTunes. For information on CD available keep checking Oden’s website. You can listen to the tracks on his site, or watch videos on YouTube.