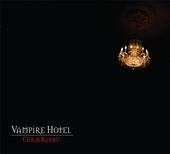 Newfoundland has long been a center for Celtic and Folk music; particularly string bands, but Motown and Rhythm And Blues aren't lost there either. St. Johns' Chris Kirby proved that with Chris Kirby on Rum & Religion in 2006, garnishing a #1 single on Canada's East Coast Countdown and being ranked as #7 on the top 20 Blues albums in 2006 by Terry Parsons' Blind Lemon Blues. A sophomore album is always a tricky proposition, but particularly so when your debut album was so well received. Kirby enlisted the help of former Big Sugar front man Gordie Johnson (Gov't Mule, Taj Mahal) to produce his latest effort, entitled Vampire Hotel. Vampire Hotel continues the hot streak for Kirby, producing a second #1 single on the East Coast Countdown within two weeks of its release (Don't Forget About Me). Let's see what all the buzz is about.

Vampire Hotel opens with Day Job, an amusing yet respectful take on the plight of all the weekend warriors out there trying to get their music career going while working a 9-5 job during the week. Anyone who's ever tried to be a working musician or anyone who's ever cared for one will find that this song hits home. It's delivered in a soulful, Rhythm N Blues package with a melody that will creep into the recesses of your brain and stay there for days. Come Clean brings faith and human nature together in messy fashion, contrasting what the protagonist knows he should do and what he does. This is a great rock tune with Funk and Soul sewn in the lining. Don't Forget About Me is the first single from Vampire Hotel and has already charted #1 on the East Coast Countdown. I can see why. Folks, this is what a #1 single sounds like. Great hooks, a melody that gets your attention and holds it, lyrics that saying something with more than a little bit of style and an arrangement that makes you want to dance until you fall down.

Heavy Rain takes on an earthy, blues-rock timbre, describing the aftermath of some tragic event; the narrator looks for deliverance in the form of rain washing away his sin. Heavy Rain details the internal conversation that leads to a confession, while the telltale heart of a dog chorus reminds him of his wrongdoing. This is an amazing bit of songwriting, entering Randy Newman territory for character development and placement in a song. See You Again is a good old-fashioned Rock N Roll courtship song, done is a style that would fit in anywhere from the 1960's to today. Don't be surprised if See You Again is the second #1 single from Vampire Hotel. Fool No More heads straight for the opposite end of the relationship cycle, kissing off someone for cheating and telling explicitly why in a tune that sounds like classic Motown/Funk. Entertainer Of The Year revisits the trials of being a bar musician; being limited in what you can play based on the clientele and how much wine/beer/whatever has passed under the bridge. It's the antithesis to Billy Joel's piano man and is extremely well done.

Identity Crisis finds Kirby digging into a plate of New Orleans-style Rhythm N Blues; the Zydeco seasoning is palpable and the songwriting is divine. Golden Year, on the other hand, takes on a vague Southern Gospel flavor in an ode to Christopher and Bridget on their fiftieth anniversary. I don't know whether this is a fictional couple of a real one, but the song is incredibly moving and has that inspired touch that suggests it's based on real life (which makes it even more ingenious if it's not). Kirby closes out with the title track, an amusing track about a place you might not want to be after dark.

Vampire Hotel is amazing. Kirby matches deft storytelling with dynamic and highly original arrangements that course with the essential spirit of Rhythm N Blues, Funk and Soul music for one of the finest all-around albums of 2009. Give Chris Kirby a little time and one big break and he's going to be a superstar. Kirby puts the listener in the middle of each tale, wrapping you in the velvet folds of story and song. Vampire Hotel is the sort of CD that the "repeat all" function was created for; a Wildy's World Certified Desert Island disc. Don't miss it. In fact, go get it right now. Go!

You can learn more about Chris Kirby at http://www.chriskirbyonline.com/ or www.myspace.com/chriskirbyandthemarquee. You can order a copy of Vampire Hotel, as well as his first CD, Chris Kirby on Rum And Relgion through IndiePool. I could not find an outlet for downloads. If you spy one on the net drop us a line!
Posted by Wildy at 5:20 AM

Rum & Religion is available for download in the usual places (iTunes, etc). Vampire Hotel is currently being processed and will be available at these outlets SOON!