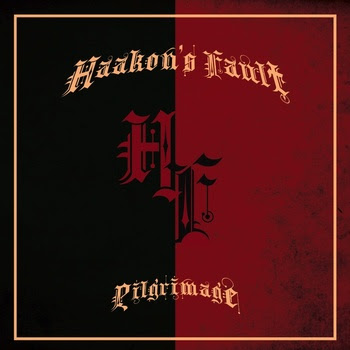 New York City nouveau hipsters Haakon's Fault bring a wealth of musical visions and styles to the table. Pouring Rock, Metal, Jazz and Funk into a musically progressive blend, Haakon's Fault might be making some of the most exciting music on the New York City scene. Their debut EP, Pilgrimage, finds Haakon's Fault mining the musical world for gems and sewing it all together with the mastery of an old-time jazz master, all set against the ruddy, soulful voice of Harry McNamara.

Pilgrimage opens with the title track, a song about finding spiritual meaning in a physical world. The construction and arrangement of this track is brilliant. Star Gazing leads with guitar work inspired by early Yes and opens into a delicious bit of 1970's style Funk/Jazz. This performance is flawless, from the instrumentation to lead vocal to harmonies. Even the Rick Wakeman-esque synth that kicks in half way through the song is wracked with perfection. Siren is perhaps the most aggressively progressive track on Pilgrimage; it's interesting musically but I didn't enjoy it as much as the rest of the CD. Eulogic mixes mellow Rock, Soul, Funk and Jazz in delicious song about the legacies we leave behind. Guitarist Mike Serman gets to show off a bit as well, laying down some serious fretwork throughout the song. Pilgrimage returns home with Glory, a song about the draw that life on the road has for some. There's serious jazz construction involved in the composition of Glory, easily the most complex and thrilling song on the disc.

Haakon's Fault spins Progressive Rock back towards its roots in Jazz on Pilgrimage, putting together five songs that are far and away superior to the material being generated currently in neo-prog, mathcore and other loosely related genres. I suspect the live shows are where Haakon's Fault is at their best, but as musical introductions go its hard to beat Pilgrimage.

You can learn more about Haakon's Fault at www.myspace.com/haakonsfault. You can download Pilgrimage from Bandcamp. No word on physical copies of the CD to date, although if you message the band through MySpace they may help you out!
Posted by Wildy at 6:29 AM