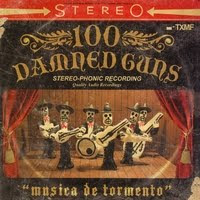 Six refugees from the worlds of Rock, Punk, Metal and Surf find themselves drawn inexplicably to the sounds of classic Country and Bluegrass. This description either describes the latest project from The Cohen Brothers (probably starring Jack Black) or Fort Worth, Texas sextet 100 Damned Guns. Coming together as a quarter in 2005, 100 Damned Guns' earliest demos generated internet buzz and caught the attention of College Radio and Indie record labels. By April of 2007, 100 Damned Guns had signed on to TXMF Records, added two members and released their first album, Songs Of Murder Pain And Woe. Local and regional airplay followed, as did the local awards and an invite to play at Walnut Valley Bluegrass Festival in Winfield, Kansas. 100 Damned Guns was also featured on the soundtrack to the Indie film Blood On The Highway. With the release of their sophomore CD, Musica De Tormento, 100 Damned Guns looks to gain national exposure with a mix of Country and Bluegrass fueled by a Punk Rock energy.

Broken Bottle Blues gets things started for 100 Damned Guns, sounding like a classic Country/Gospel tune from the 1950's or 1960's heyday of the Grand Ol Opry. The musicianship here is first class and the songwriting is out of this world. Already On My Way has a California Country sound, done up in the gentle wail of a mournful guitar. 100 Damned Guns picks up the pace on Ain't That Bad Anymore, nearing warp speed on a fun tune that details a list of bad behaviors in contrast to the present. One More Time is a tale of woe from a man who's been thrown out of his house. He's asking to come home, promises to change, although this conversation has likely played out many times before. This is a great bit of songwriting and creates an image for the listener that is crystal clear.

Go Back To Sleep is something of a protest song, decrying a country's leadership that strives to make war. It's easy to see how Go Back To Sleep might have been aimed at either the former or current US Administration, although the message is delivered with a subtle wit that doesn't name names. Anna Lee heads for the Rockabilly side of town in a classic sounding tune that should cause the request lines at Country Radio to explode in flames. This is a tune that's a potential hit across generations and demographics of Country music fans, and the best tune on the album. Red River Valley opens as a classic Country tune with a southwest flavor and explodes into a rambunctious Punktry tune that will have fans at 100 Damned Guns' live shows clamoring for more. The Celtic roots of country music show clearly here. Musica De Tormento closes out with Old Barbwire, a rhythmic and rambunctious who-done-it in song that's an entertaining and musically enriching experience. It's a fitting closes to the album, swinging and swaying out the door two-by-two to a martial beat.

100 Damned Guns is an unusual premise; one that works much better than I might have expected. Then again, if you're going to play Country and Bluegrass music in the great state of Texas, you better be good. Musica De Tormento has been nominated for local awards; don't be entirely surprised if the accolades aren't local for long. 100 Damned Guns is the real deal. Check them out.
Rating: 4.5 Stars (Out of 5)

You can learn more about 100 Damned Guns at http://www.100damnedguns.com/ or www.myspace.com/100damnedguns. You can purchase Musica De Tormento as either a CD or download through CDBaby.com.
Posted by Wildy at 5:20 AM