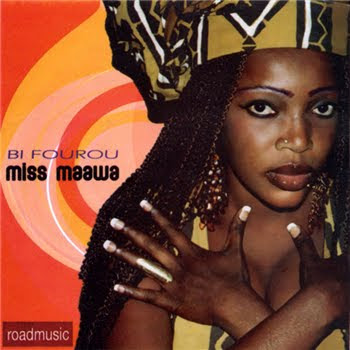 Miss Maawa is a native of Africa's Ivory Coast. The daughter of singer Kagbe Sidibe is following in her mother's footsteps as one of the most prominent and well-known signers to come out of the Wassoulou genre of music. Wassoulou is a popular music form that infuses traditional African sounds and rhythms; it is generally song by women and deals with women's issues. The sound is similar in style to the African music that informed Paul Simon's classic Graceland album. Miss Maawa release her first album in 1999 at the age of 17 and added two more before reaching the age of 25. Some time has passed since the last album, but a chance meeting with Italian producer Marco Romano turned into a recording session and now Miss Maawa's latest album, Bi Fourou.
As a disclaimer I feel obliged to say that Miss Maawa is my first exposure to Wassoulou, but I have to add that there is something inordinately powerful and even catchy about Bi Fourou. The rhythmic structure alone is very different than in Western Music, creating an ever-evolving rhythmic structure to tantalize the mind while Miss Maawa's impassioned vocals wash over you. Dra is very much in this vein, essentially creating a sonic landscape over which Miss Maawa sings. Bi Fourou has a folky sound and a rhythm you'll want to dance to. Not knowing the language I can't speak to the lyrics and their meaning, but there is something uplifting about this tune that will inspire you to want to be a part of whatever it is. Sini Mori has a distinctive Afro-Pop sensibility that inspires the listener to move. Sonically, this is my favorite song on the disc even though it's not the most complicated of the tunes presented here.

Danse blends Miss Maawa's West African sound with a touch of European light Electronica/Dance; you can almost hear the roots of the next big musical form scratching for purchase here. Miss Maawa's engaging vocal style and penchant for arrangements with a solid grounding in Wassoulou but always open to touches of Western Influence may make her a perfect candidate to be at the vanguard of such a movement. Demisenw futhers this blending to include touches of Europop. The inherent rhythms of Miss Maawa's signature style are still here but an evolution has begun. Sina Musso heads back into traditional territory with a highly spirited featuring the soku prominently in support of the vocal line. Bi Fourou closes out with Diarabi, which sounds more like a Western New Age/Pop tune than anything else on the disc. Diarabi is a mellow song with a gorgeous theme that brings out the deep textures and hues in Miss Maawa's voice.

Miss Maawa is one of those rare performers where you don't have to understand the language she's singing in to feel the power of her lyrics. Maawa's voice is a deep and eloquent alto that's full of the spirit and soul of the generations that preceded her. You can almost here the distance of time in her voice as she pulls you in and wraps the melody around you like a net. Bi Fourou is a thing of abject beauty; a creation of earth and water and sky that you don't so much listen to as get to know. If I may paraphrase a popular expression, I don't know Wassoulou, but I know what I like.

You can learn more about Miss Maawa at http://mymondomix.com/roadmusic/missmaawa. At present I can identify no online resources to purchase Bi Fourou, although you may contact the artist through the website above.
Posted by Wildy at 5:20 AM