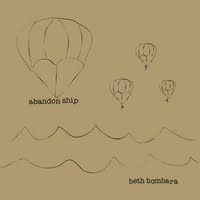 Having reviewed Beth Bombara’s latest CD, Beth Bombara And The Robotic Foundation, we thought it would be fun to step back and time and take a look at an earlier, solo recording. Bombara was kind enough to send us Abandon Ship. While her sound tends more towards Bettie Serveert and The Breeders nowadays, she was originally compared favorably with the likes of Beth Orton. I don’t know that I quite agree with that assessment, but I was very pleasantly surprised by Abandon Ship.

Bombara opens with the title track, an unorthodox folk tune that sounds at first like it's been mixed incorrectly until you realize it's intentional. The song is about feeling out of place in a relationship and realizing ultimately that it's not going to work. Bombara even used a slightly out-of-tune piano to drive home the sense of something not being right. Artistically the song is brilliant; the arrangement is rather simple but with a lot of little touches (bells, piano mixed on top of the other instruments, piano out of tune, etc.). If I hadn't already been introduced to Bombara from her album The Robotic Foundation this would be a highly intriguing introduction. Time is a mournful song about the inevitability of change in the form of the passage of time. It's an emotionally honest monologue about truths we all face at some point in our lives and is very well-written.

Till The Sun Goes Down takes Time one step further; making every second count. The sun going down here would appear to be a euphemism for death, and Bombara makes it clear that she's all about living and making the most of her time, particularly within the bounds of a relationship. Making Our Way is one of two personal favorites on the disc; a song of dedication and devotion. It's a mature take on a mature relationship, weathering storms together and charting a course for something more. Bombara shines here at her most personal with intelligence, a hint of wit and an emotional availability that most artists have a hard time projecting live, much less on an album. Bombara closes out with Worn, a wonderfully dark and urgent song about protecting yourself in a relationship that carries a lot of risks. This is the most dynamic and lively song on the disc and has an infectious quality to it despite the dark tone. Worn is the other personal favorite tune on the disc, and reflects a much deeper well of song-writing talent than the already impressive showing thus far on the disc.

Beth Bombara impressed us with The Robotic Foundation, but I daresay that the raw, emotional quality of her songwriting as a solo player/singer might be more compelling. Abandon Ship is a stunning EP that deserves a lot wider distribution and notice than it's already received. There are a handful of folks who might compete for the crown of best songwriter in Indie Music. I don't know if she'd win or not, but Bombara definitely deserves to be in the conversation.

You can learn more about Beth Bombara at http://www.bethbombara.com/ or www.myspace.com/bethbombara. You can purchase Abandon Ship as either a CD or download through CDBaby.com.
Posted by Wildy at 5:10 AM