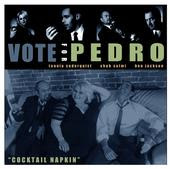 Vote For Pedro is a novel Boston quartet traversing the bounds of Pop, Rock, Hip-Hop, Jazz and Comedy to rave reviews. Led by vocalist Diva Taunia (who recently lost 170 pounds and shared her experiences with the world via YouTube), Vote For Pedro creates mellifluous musical magic that is much easier to enjoy than it is to classify. Diva Taunia is an ASCAP songwriter, vocal coach, clinician, session singer and front woman all wrapped into one. Diva Taunia has shared the stage with such performers as The Bobs, Wayne Brady, Patty Larkin, Zoe Lewis, Sean Altman and The Persuasions, and has been won a shelf full of awards for her vocals both regionally and nationally. Vote For Pedro's Cocktail Napkin was released in 2006 but is worth revisiting; the mix of quality music and comedy is rare and is just too good to classify as a novelty.

Cocktail Napkin opens with Do You Trust Me, mixing A Cappella style vocal harmony arrangements in a highly danceable Pop tune. Diva Taunia has a voice people will line up to listen to and practically melts a speaker wire or too while imploring you to dance along. Even the rap serves to enhance the listening experience here. Taunia leads Vote For Pedro into one of the more unusual covers of George and Ira Gershwin's Summertime that I've heard, starting as a dark, free-form interpretation that morphs slowly into a near-frantic tripped out techno/jazz hybrid. Traditionalist may not be entirely thrilled with this one, but it's a brave, novel and successful choice. Cool Kidz answers the old question, "If all your friends jumped off the bridge would you jump too?" with a resounding splash and gurgle. Featuring Manhattan Transfer style vocal harmonies, simple bass and drum loop instrumentation and a rap/sing combo, Cool Kidz is good enough to get mentioned in the Pop category and whacked enough to earn a spot on a show like Dr. Demento. Cocktail Napkin sounds more like a college A Cappella group using minimalist instrumentation than anything else. Vocalist Shah Salmi provides and easy, sure and pleasant performance while the rest of the band kicks in some delicious vocal harmonies. Vote For Pedro wraps up with Tall Dark And Handsome, which won a CARA Award in 2007 for Best Humor Song. The ladies out there will nod in sympathy with this song, knowing that often the best looking men "play for the other team".

Vote For Pedro is a trip. Salmi is a strong performer and deserves more attention than he'll ever get here because Diva Taunia is such a dynamic figure it's easy to lose focus on the rest of the group. Taunia's voice is powerful and supple, able to belt one moment and coo a lyric whisper the next. The sense of humor here is actually funny, something that is all too rare in artists who try to be funny in song. Like the Smothers Brother before them, Vote For Pedro's greatest sleight of hand is their ability to create musically serious and significant music. Just when you think they're serious they'll throw you a curve; and just when you start to think maybe they're a novelty group after all they'll create a phrase with such harmonic purity and beauty you'll be moved. Make sure to get your Cocktail Napkin.

You can learn more about Vote For Pedro and Diva Taunia at http://www.divataunia.com/ or www.myspace.com/divatauniamusic. You can purchase Cocktail Napkin via Vote For Pedro’s web store.
Posted by Wildy at 5:15 AM

Thank you so much for such a nice review!

I have known and loved Diva Taunia since she was my sister's elementary school friend a life time ago. She has an amazing voice and plays a mean trumpet (not that she probably does that anymore...). Taunia is a very talented lady - she's got more talent in her little finger than most people do in their whole bodies. I remember one high school concert when she took the mike opened her mouth and the most amazing and beautiful sound came out. She knocked my socks off!! That was a long time ago - before she had training... So, people, Buy her CD. Listen. And then come back and give her 5 stars out of 5!!
xox
LBC