Review: Sideways Reign - A Stand For All Stages 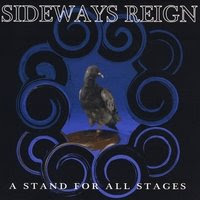 A Stand For All Stages is one of those rare albums that I find to be a pleasant listen but can't really come up with much to say about after the fact. Vocalist Justin Stang is good but doesn't really stand out. The same can be said for the songs themselves. Similar to a film underscore that plays in the background but doesn't really draw attention to itself, Sideways Reign fills in the sonic gaps in the background without ever really stepping forward to claim the spotlight. The album consists of eleven acoustic-electric turns that manage to set you at your listening ease without making a distinct impression or impact. I even had a hard time picking a stand-out song, although Rebels Rise edges up on the basis of a slightly different style, incorporating a slice of reggae into the mix. Settle On mixes a hint of funk in, and Love Song Suicide gets points for sounding more like a pub tune than the lyrics would justify, but in the end Sideways Reign just doesn't manage to stand out.

You can learn more about Sideways Reign at http://www.sidewaysreign.com/ or www.myspace.com/sidewaysreign. You can purchase a copy of A Stand For All Stages at www.cdbaby.com/cd/sidewaysreign.
Posted by Wildy at 5:00 AM

The problem with your review is it is hard to critique music when your head is so far up your ass your digging corn out of your ears for a week. Is it so hard to ask that you do your job, "music critic" what a joke. I'd be mildly offended but I realize I have spent more time on this comment than you did reviewing this cd. You probably have a promissing career working for rolling stone praising bands that were great 20 years ago. Let me guess you love Nickel Back, U2 smoking and pole. If you are going to write a bad review on the internet about me at least get you facts strait I did not sing one word on this disc. Furthermore the singing and songwriting on this disc is excellent you should give it a listen.

P.S. If you are man or woman, enough send me something you have created out of nothing be it art, music, poetry whatever. At least I will have the respect of actually listening to it and getting your name right when I tell you what I think.

Yes. I remember my first beer...


Seriously, though. Fair enough, opinion wise, but horribly un-professional delivery. I listenered to the album very carefully; I had to to ultimately form the opinion I did. As for getting the vocalist's name wrong, that's a matter of jotting down the wrong name in my notes. Easily corrected.

If you read my profile you'll see that neither U2 nor Nickelback are among my favorites. As for smoking and pole I am not sure about your references, but you might want to think about the sort of image you convey of yourself on the net if you're going to continue to try and advance in a business that's largely based on public opinion.

All in all, the review was very neutral. 2.5 out of 5 is an average effort. Opinions are all that critics can offer. Whether you agree with a specific one or not, always remember that there is some element of truth in every one.

Wildy,
Casey's comments are not the ideas and opinions of Sideways Reign or Shuk Dog Records or any of their employees but are solely his own. On behalf of the band and label, we apologize for the manner in which his opinion was delivered and assure you that this is not indicative of the business we conduct. Thank you for your time, critique and feedback, as it can be noted that improvement can always stem from corrective criticism. I hope that this does not leave a poor impression, and can give my word that we will do whatever we can to rectify the situation. Thanks again.
-Justin Stang, Sideways Reign