Review: Iwrestledabearonce - It's All Happening 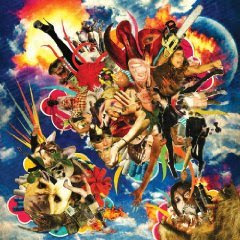 Iwrestledabearonce - It's All Happening
2009, Century Media

Iwrestledabearonce is a thrash metal band unafraid of incorporating electronic music into their sound and also has some serious Prog tendencies. I personally am not big on the screaming thing, but Krysta Cameron is a very sound vocalist when singing. You'll need a lyric book to follow along, and the songwriting can be downright chaotic, changing from stave to stave and even measure to measure between lyric, melodic rock and Thrash/Prog. You Ain't No Family establishes the base sound, but it's the second track, White Water In The Morning that truly throws down the gauntlet for listeners. The song is completely over the top, with Krysta Cameron really getting her scream on (particularly in the second half of the song). Danger In The Manger is manic and maniacal; have fun trying to keep up. Tastes Like Kevin Bacon is all over the map and would appear to incorporate a distinct sense of humor but remains undecipherable in at least some portions of the song. Other highlights include Pazuzu For The Win, Eli Cash Vs. the Godless Savages and See You In Shell.

Iwrestledabearonce is going to be huge. Sitting at the forefront of a new movement in hardcore music, this Prog/Thrash behemoth is just a little bit faster and a little bit better than anyone currently on the scene. That's not to say other bands won't catch up, but the chaotic nature of the songwriting is bound to make bands like Yes and King Crimson applaud in appreciation. It's All Happening is a pretty heavy record and won't be appreciated by everyone, but the Artpunk crowd should elevate Iwrestledabearonce to icon status.

wow you really have no idea about music.
no prog, no thrash.

its called mathcore, look it up.

Just because you're too young to realize someone may have thought of these things before...

Thrash Metal is the style/name originally on bands like Metallica when they were emerging back in the 1980s.

Progressive rock was an outgrowth of of attempts to combine Rock and Jazz with classical time signatures and song construction. Now let's see what Wikipedia has to say about Mathcore:


Hmmmm... sure sounds like progressive rock combined with Thrash Metal to me.

Score 1 for the hapless blogger with no idea about music. :)

yeah all u did was look up genres on wikipedia, they have so many genres of music its to hard to categorize.

Yes, to prove a point to the little anonymou ruffian who thinks his generation was the first to think of anything.

The whole categorization thing becomes a mess after a while, because each successive generation reguritates older sounds in a new form or image (and sometimes just redoes a genre outright) and puts their own name on it. It's kind of like your mom writing your name on your toys with magic marker when you were little. It's an ownership ideal that we all seem to have a psychological need for, but makes having discussions about styles across generations difficult at times.