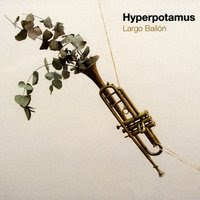 Hyperpotamus is Madrid’s own Jorge Ramirez-Escudero, a one-man vocal band who eschewed rock bands for the subways of Madrid. Within six months of that decision Hyperpotamus was playing to crowds in excess of 1,000 people, and now tours all over Europe and the United States. His debut album, Largo Bailon, documents the distinctive sound and vocal style of Hyperpotamus. The only instrument found on the entire album is Ramirez-Escudero’s voice.

Largo Bailon opens with A Melancholy Hyppo, which sounds like what might happen if you out the Beach Boys in a room with Bobby McFerrin and a large amount of hallucinogenic comestibles. Dinamo Domino takes on a dance beat and some funky chord work to create an unusual and joyous arrangement. Throughout Largo Bailon, Hyperpotamus creates a vocally powered landscape that draws from Jazz, Rock, Pop, R&B and Jazz, even creating some unusual and almost whimsical transitions such as in The Early Bird Catches A Cold. The Unhappy Hedonist has an almost robotic sound contrasted with wonderfully odd harmonies over the top. What starts out as a relatively simple rhythmic chant ends up as the most beautiful textured and complicated piece on the album. Ramirez-Escudero has quite a vocal range to sing all of the parts presented here, and it’s clear that short of hiring other singers to work in ensemble the sounds found here could never be re-created on stage, but Largo Bailon is an experience worth having. Other highlights include the deliriously weird Peloto, the frenetic Beach Boys meets Ladysmith Black Mambazo sound of Toy Soldier's Day Off, the lyric Wreck Divine and Vista Desde El Bachibato.

While Hyperpotamus could never recreate the sounds on Largo Bailon onstage without expanding into a full ensemble, Largo Bailon might be one of the most pleasant musical surprises of the year. A Capella projects are often relegated to the ranks of college choirs covering popular tunes or whatever Bobby McFerrin is working on these days, but Largo Bailon is original, pleasing to the ear, unique and just plain good. Hyperpotamus, with the right exposure, could be a sensation!
Rating: 4.5 Stars (Out of 5)