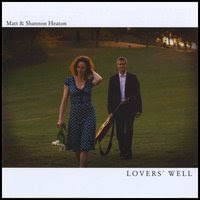 Matt And Shannon Heaton are partners both on stage and off. The married duo are leading voices in Boston's vibrant Celtic Music scene, with Shannon founding BCMFest. As members of Boulder, Colorado's Siucra, the Heatons produced 3 full length albums before a move to Boston returned them to duo status. As a duo they've released five albums, with their fifth, Lover's Well, hitting shelves on Valentines Day, 2009. The album is a collection of fourteen love songs in the Irish tradition, melding traditional Celtic sounds with American Folk traditions to create an ultimately listenable and enjoyable sonic experience.

Matt Heaton's guitar style is highly intriguing, offering up highly textured musical tapestries against which Shannon's lilting voice, or alternately her inspired flute play, can soar. Listening to songs like Lily Of The West you'll swear there's more than one guitar on the album, but it's not the case. Shannon's voice will floor listeners for its beauty, purity of tone and emotive tendencies. Where The Moorcocks Crow is hauntingly beautiful, and one of the more memorable tracks here. Brad's Honeybees is a daring reel for flute and guitar that I've heard elsewhere under another name that I can't place at the moment, but is highly danceable. Bay Of Biscay is comes from the well of tragic love songs that run through the Celtic songbook and serve as the root for modern country music. The guitar work here is subtly and beautifully arranged and played.

New Married Couple is an energetic jig fitting the state of mind the title represents. Golden Glove sounds as if it might have come from the Maritime school of Celtic Music. The Heatons harmonize perfectly on the choruses here, and the arrangement is gorgeous. Mountain Rambler is a flute driven reel with minimal guitar in the arrangement and perhaps the rawest of the performances here, sounding as if you're sitting in at a kitchen party rather than listening to a CD. Lady Fair sees Matt Heaton take lead at the microphone. His voice is pleasant and clear and perfect for the musical setting he lays down with a minimalist, martial guitar arrangement. Botany Bay captures the live sound I referenced early, and mixes the sorrow of saying goodbye to home with the hope of a new horizon. Shannon Heaton gives what amounts to a diva performance here; listeners will be on the edge of their seats. The album closes out with Poll Halfpenny, an energetic dance tune to send the listener on their way with a smile on their faces and the joy in their hearts that the Heatons radiate throughout the fourteen songs presented on Lover's Well.

Matt and Shannon Heaton find the perfect balance of troubadour spirit and virtuoso musicianship on Lover's Well. I haven't been privy to their prior releases, but this is one of the best new Celtic recordings I've heard this year. I highly recommend Lover's Well to readers, and suggest it's so good you might want to check out some of their other releases as well. Lover's Well is a Wildy's World Certified Desert Island Disc. Make sure you check it out.

You can learn more about Matt and Shannon Heaton at http://www.mattandshannonheaton.com/. You can purchase a copy of Lover’s Well at www.cdbaby.com/cd/msh.
Posted by Wildy at 5:20 AM