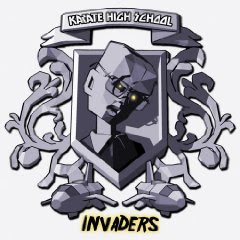 Hailing from the Northern California's Bay Area, Karate High School are fans of many disparate types of music. These interests and influences work into their music and combine in unusual and delightful ways on their third album, Invaders. The album was recorded in front man Paul McGuire's childhood bedroom without high tech equipment or even much of a budget. The result is a pop hook driven album that will play well with modern rock fans. Focusing more on process than outcome, Karate High School may have accidentally created one of the big breakout rock albums of the year.

Invaders opens with the quirky Zombies Everywhere, a horror movie compressed into a four minute pop/rock song. Big harmonies, big guitars and hooks that are as lethal as the song subject make this a can't miss. One Trip Around The Sun sticks with the same musical formula (minus the undead protagonists) for a highly commercial sounding side. Aside from the addictive choruses and hooks, Karate High School has McGuire's strong, clear voice going for them. Punk Rock Uniform is highly melodic pop number that maintains the momentum and energy seen thus far on Invaders.

Fell In Love With A Robot is a tongue-in-cheek look at robot-human relations featuring Barenaked Ladies style wit and some nifty electronic accents. That wit turns self-deprecating on You're Not Fooling Anyone (Except Me), with a mid-tempo verse and high-energy chorus and impressive harmonies. Failure Is Officially An Option is a wide-ranging and unusual piece that goes a bit beyond the pop/rock mold and shows some almost progressive tendencies. Invaders closes out with Dear You, It's Me; a song written to a former flame after lives and people have long moved on. Other highlights include Under The Microscope, The Horror Show and Under The Microscope.

Karate High School is a name you're likely to hear a lot over the next few years. There's enough populist sound here to get them the attention of radio, and enough variation from that sound to draw in folks who have forsaken commercial radio and their 25 song formula. Invaders is a thrilling album full of distinct pop sensibility and a songwriting talent beyond the years of the band. Big things are ahead for Karate High School.

You can learn more about Karate High School at www.myspace.com/karatehighschool. You can purchase a copy of Invaders through Amazon.com or download it through Amazon MP3.
Posted by Wildy at 5:20 AM