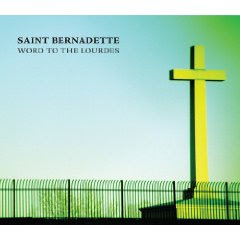 Saint Bernadette - Word To The Lourdes
2009, Exotic Recordings
Led by the honey-coated steel voice of lead singer Meredith DiMenna, Bridgeport, Connecticut's Saint Bernadette brings their introspective relationship angst back to light on Word To The Lourdes, their most rock-n-roll effort to date. Along with husband, songwriting partner and guitarist Keith "Touch" Saunders, DiMenna belts, croons and lays her heart on the line across six distinctive and musically pleasing tracks. Rounded out by guitarist Joe Novelli, bass player Bran Anderson and drummer Dave Valle, Saint Bernadette hits a lot of high notes on their first of three releases due in 2009.

DiMenna's voice is distinctive; a dark and pleural resonance with just a hint of steel that is highly interesting to listen to and gives Saint Bernadette an instantly recognizable sound once you're familiar with it. The album opens with Nobody Wants My Kind Words. The song itself wasn't my favorite, being a bit overly repetitive, but the song is a great showcase for DiMenna's voice. Already Gone is a punk/pop anthem that would make Blondie proud, and should vie for real commercial attention. He's A Collector is a bit of delicious pop-noire; not a song that you'd ever expect to earn radio play but a fun listen nonetheless. Wrap It Up has an urgent, rocker-girl quality to it that walks the line between classic rock and 1980's pop. The EP also features I Can Add You To My List and Don't Take This Away.

Saint Bernadette is inspired and influenced by classic rock & pop sounds that span a couple of decades, this all shines through the post-punk/pop sheen that envelops the six songs on Word To The Lourdes. If the songwriting is a bit uneven at times, it's more than compensated for the by the consistently excellent performance of Meredith DiMenna and crew. In many ways they remind of a young band that came to prominence in the mid-90s fronted by another dynamic female vocalist. Veruca Salt and Saint Bernadette share the same Rock N Roll spirit and rough and tumble aura. Make sure you check out Word To The Lourdes.

You can learn more about Saint Bernadette at www.myspace.com/saintbernadette or http://www.exoticrecordings.com/. You can purchase a copy of Word To The Lourdes at Amazon.com, or download a copy through iTunes.
Posted by Wildy at 5:59 AM