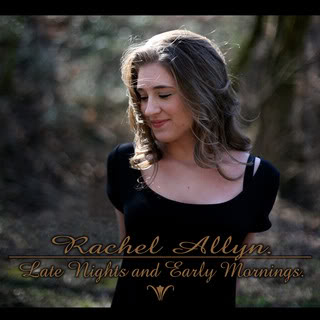 Rachel Allyn is a little lady with a big voice reminiscent of some of the old-time country greats. But she's not just a country girl; she's a little bit Rock N Roll too. Allyn has put in her time in New York and California and even in the Tennessee 'Tonks, perfecting her sound and performing style and getting ready for this moment. Her debut EP, Late Nights And Early Mornings, is a 100% DIY affair, and provides an exciting musical picture of an emerging talent that isn't about to be contained. She's performed with Bobby Bare, and had impromptu performances with Shania Twain and Gretchen Wilson, but the time may be coming when up-and-coming vocalists brag about singing with her.

Late Nights And Early Mornings opens with Stand Still, a very appealing bit of Country/Rock. Allyn sounds like a classic country vocalist here, not just giving her best vocally but with her personality shining through the song in spades. Allyn sounds like she's enjoying every moment, and that energy, along with the essentially catchiness of the song makes it a great listen. The fact that Stand Still make great mix-tape material just ads to the package. On Bury Myself In Your Arms Tonight, Allyn gives a classic performance with a modern feel that has significant potential to break wide open. This is the sort of love song Country Music Radio has been starving for, and the licensing potential here is huge.

Allyn pulls off the perfect populist anthem on Gettin' By. Anyone who has ever trudged through the day-to-day realizing that their dreams are getting further and further away but never given up will see a bit of themselves here. Again, the commercial potential here is huge, particularly in troubled times. Allyn changes speeds with When The Young Ones Go, an ode to all of those who have given up their lives in wartime and for those left behind. It's a gorgeous and heartfelt tune that is poignant and pointed without getting messy with politics. For all that's come before, however, Allyn saves the best for last. You Drive Me Crazy has the potential to be the sort of monster hit that Nashville just doesn't produce anymore. Country, R&B and Rock blend to create a seriously danceable tune that should be all over the airwaves. Allyn's sweet and sultry voice gives this an extra lift and proves there's hope for country music after all.

Rachel Allyn deserves to be the next big thing in country music. Strong songs, strong performances and a personality that is likeable beyond measure and shines through the songs add up to what might just be the perfect package. If you check out one new country artist in 2009, it should be Rachel Allyn. Late Nights And Early Mornings is a wonderful surprise and a Wildy's World Certified Desert Island Disc. Get it.

You can learn more about Rachel Allyn at http://www.rachelallyn.com/ or www.myspace.com/rachelallynmusic. You can purchase Late Nights And Early Mornings as either a CD or download from CDBaby.com.
Posted by Wildy at 6:31 AM

WHAT A BEAUTIFUL REVIEW. CAN'T WAIT TO HEAR THE CD
BEST OF LUCK TO WONDERFUL, BEAUTIFUL PERSON FOR NOW AND IN THE FUTURE.

FROM A VERY PROUD GRANDFATHER
DEDAD

Rachel and Warren are an unbeatable combination....I'm so happy and proud of their rendition of my song, You Drive Me Crazy....Rachel you look and sound more like a star every day! Don Oriolo