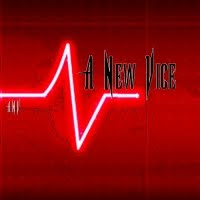 Hollywood, California has long been a good place to pick up a new vice. Perhaps that's the inspiration for A New Vice, a band that's been blowing them away at The Knitting Factory and The House Of Blues. With a reputation for amazing live shows, A New Vice channels that live energy into the self-titled debut album. Managed by Ron Welty (Offspring), A New Vice slots in well amidst bands such as Foo Fighters, 30 Seconds To Mars, Three Days Grace and Nickelback, but carries with them a sense of authenticity and unpretentiousness that is refreshing in the world of Modern Rock.

A New Vice opens with Lights Turning Green, a wonderfully guitar-driven active rock tune with real spirit. Big riffs and hooks are the raison d’être here, and if you listen to the opening the song practically sings its name to you. A New Vice relies on a sing/speak vocal style in the verses that's not exactly rap but isn't too far removed, with more traditional rock choruses added on. Faithfully is a heavy ballad for modern times with great presence and a dynamic vocal line, and is perhaps the most radio-ready track on the disc. The next song, Fake, could almost be an inside joke for the band. Following a song entitled Faithfully, Fake has a cadence in the chorus that sound suspiciously like it was drawn from the Journey song of the same name. The song is instantly memorable with highly emotional vocals and a faux-happy chorus.
Wait For Me expands on the big A New Vice's momentum blending and Emo feel with an almost 1980's Whitesnake style of Rock N Roll. The result is highly entertaining and a great listen. As You Fade finds A New Vice trending more toward the melodramatic side with a highly emotional Rock N Roll song that's enjoyable but begins to show the limitations of the band as well. In essence, vocalist Sash Kuzma is overwrought much of the time he is singing, rarely varying sound, style or approach through the first half of the album. After a while it creates an impression that the songs on A New Vice all sound the same or similar. A New Vice does change things up a bit later on, but the impression is pretty firmly planted by that time. Let Me Go is the first sign of variation, changing approach and intensity a bit. It's a decent song but doesn't manage to shake the overall impression. Thinking About You may be the saving grace of the band in this regard, a true power ballad in which Kuzma shows shades of Freddie Mercury in his most dynamic and engaging performance on the disc. A New Vice closes out with Promises, a vitriolic song that's more style than substance and somewhat reinforces the impression that Kuzma sings essentially at one level only.

A New Vice has real potential, but would be well-served by expanding the horizons just a tad and showing a bit more depth stylistically. Otherwise they are likely to get pigeonholed into the "all their songs sound alike" genre where bands go to whither slowly away. That would be unfortunate, because there is something special about this off-beat quintet. Listening to A New Vice, there's enough here to imagine these guys taking to the biggest stages somewhere down the line. I just think they have a bit more growing to do as a band before they get there.

You can learn more about A New Vice at http://www.anewvice.com/ or www.myspace.com/anewvice. A New Vice’s website seems to suggest the self-titled debut was released in September, 2009, but no on-line outlets are noted. Keep checking the band’s website for details.
Posted by Wildy at 6:23 AM