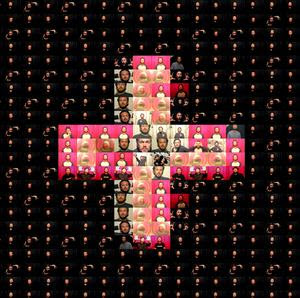 Johannes, South Africa native Gavin Hardkiss is a world-renowned DJ and creator of music. Residing in San Francisco these days, Hardkiss was one of the progenitors of the dance music of San Francisco in the 1990's. He has released numerous albums in various countries around the world and influenced an entire generation of musicians and DJs. As his alter-ego Hawke, Hardkiss has released three albums that mix organic and electronic music in vein of late-1980's electro pop styles. Hawke's fourth album, +++, is due for release on October 20, 2009 on Eighth Dimension Records.

+++ opens with Monday Comes And Goes, a shoegaze-Electronica paean to the drudgery of 9-5 attachments. Hawke creates an electronic soundscape that mimics traditional song structure but ends up being fairly self-derivative. On My Own shows more promise, putting together a beat and faux-melody that insinuates itself into the mind. Hawke' talk-sing style gets his message across but has a neutral effect on the overall listenability of song and album alike. Inside Job doesn't offer much in the form of song construction or styling, but will be quite a treat for headphone junkies. Hawke gets into his usual territory with Hold On To What You Got, sounding like something he might spin at a party. The originality and complexity here are forgotten in favor of solid beats and the whims of improvisation.

In The Clouds finds Hawke on a relatively bland but listenable pop song that may spark briefly for pop radio but is more likely a soundtrack placement. Hawke gets instrumental on My Mom Is Your Dad, mixing organic elements with light Electronica for a pleasant listen akin to waiting room music. A similar make-up exists in The Silver Sun Is Setting, albeit with a sparse vocal line that consists of pillared moments of repetition. Sonically interesting at first, the song proceeds to go nowhere musically or creativity. Lyrics are added via Vocoder but don't add any sort of narrative or purpose to the tune. With Everything Is Happening At The Same Time, Hawke guarantees at least one track with real club potential. The lyrics and progression don't really make a significant impression, but the beat is palpable and the sort of dynamic that flies in Club culture. Secret Lullabye finds Hawke reaching for the ethereal realm of electronic with much less passion or conviction than bands like Delirium possess. Hawke closes out with an eight minute epic, These Combinations Have Not Been Before. Opening with a bare hint of instrumentation and running water, Hawke uses undulating synth and rhythms to build a watery composition that is the class of the album. Hawke finally digs down and finds some passion and creative fire (or at least conveys it) just in time.

+++ just doesn't have the chutzpah to stand on its own two feet. Electronic music can be a highly unforgiving medium for the artist. There are times when you can poor your heart and soul into creating something that sounds bland and lifeless. I am guessing at the former, but the latter is certainly true here. Hawke certainly is trying to convey something on +++, but the spirit simply doesn't come through with a couple of exceptions.

You can learn more about Hawke at www.myspace.com/hawke or http://www.lovewonanother.com/, where you can obtain downloads from +++.
Posted by Wildy at 5:00 AM