Review: Joe Colledge - Out Of The Blue 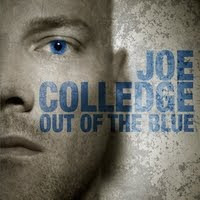 Morristown, New Jersey's Joe Colledge cut his teeth as an original singer-songwriter in a market glutted with cover bands. The Philadelphia native has been on a steady rise in the Indie music world since the release of his debut EP/Demo Convent Station in 2005. In 2007 Colledge hooked up with producer Anthony Vitale (Glen Phillips, Marshall Crenshaw) and was signed to OMS Records. The resulting album, Table For One, won Colledge numerous accolades and placement on several end-of-year "Best Of" lists. Colledge looks to keep that momentum with his third release, Out Of The Blue. Co-produced with Vitale, Colledge looks continues to mature in his songwriting as he uses music to understand life, and vice versa.

Out Of The Blue opens with Rock Song, laying down a Middle-American Blue Collar feel with big pop hooks. The song has great movement and is a strong way to start off. Waiting For Love is a bit more straight-forward rock with a health dose of vocal triads in the chorus. Colledge is bound to grab some attention with Won't Let Go, perhaps the greatest ode to autoeroticism since The Divinyls I Touch Myself. I will be incredibly surprised if this song doesn't end up licensed for a teen movie ala American Pie. Lay Down On Me wasn't my favorite song on the disc, but Colledge brought in Amy Regan and her exquisite voice on backing/duet vocals. It Finally Happened is an upbeat Pop/Rock tune that sounds a bit like Summer Nights from Grease in the refrain. American Dream is your prototypical September 11 tribute song; a bit schmaltzy but heartfelt and very personal to those who were directly involved. Colledge closes out with a cover of Three Dog Night's Shambala, making it sound like a danceable Van Morrison tune.

Out Of The Blue is an uneven effort with some very strong moments along the way. Joe Colledge has a strong, likable voice and an affable presentation. Word is that he develops great rapport with an audience, so the weaker tracks here likely will play well live. It's hard to capture that live feel on CD, but Colledge is a talented enough songwriter to overcome any such difficulty. Make sure to take some time to check out Joe Colledge and Out Of The Blue.

You can learn more about Joe Colledge at http://www.joecolledge.com/ or www.myspace.com/joecolledge. You can purchase a copy of Out Of The Blue from CDBaby, or you can download the album from iTunes.
Posted by Wildy at 5:53 AM

CD has sold out at CD Baby but more will be available on 10/6.