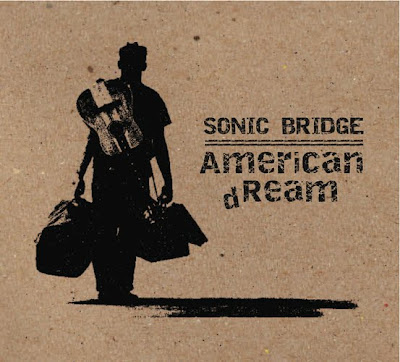 Sonic Bridge is a singer/songwriter from Massachusetts with a love for melody and an equal love for social commentary. The gift of music was imparted to Bridge from his father on the brink of deployment to Vietnam in 1969. His father taught him the chords to Home On The Range and asked that Bridge play the song for him on his return. It took the tragedy of September 11, 2001 to inspire Bridge to pick up a pen and begin to write; he hasn't stopped since. With influences running from 1960's Folk to Country to Pop Singer/Songwriters of the 1970's, Sonic Bridge has crafted a sound that is comfortable and familiar, and keeps it all fresh with lyrics that are topical, insightful and compelling. Bridge's debut album, American dReam, was released in September, 2009.

Celebrity Society is a humorous and scathing diatribe against the cult of personality that has replaced rational discourse in modern society. Bridge details the oncoming fall of Western Civilization as well as a sociologist, all wrapped in an infectious melody. Likewise, Weapons Of Mass Distraction takes to task all of the devices and gadgets that distract us from the things we should be paying attention to. Bridge uses driving as a real example, but the song has more universal applications than the obvious. The arrangement here is a sharp country setting that would play well to commercial Country radio but probably requires a bit too much thought for commercial success. Bridge makes light of humanity's taste for unusual cross-breeds of dogs in Doggie Style, pointing out that a generation ago the animals people pay thousands of dollars for now were called mutts and generally ended up in shelters.

Open Road Lament is a trucker song with a twist; it's all about reaching a stage where the call of home and love is more powerful than the call of the road. There's an introspective melancholy here; the narrator wants to get back home to where his love is. The melody and harmonies here are part of the aura of the song; and the arrangement is near-perfect. A True Patriot's Work Is Never Done contrasts the madness of a single individual with the madness of a social system that would award a dangerous man an adopted child. The song is a little too over-the-top to be anything but true. The hits keep coming on American dReam, where Bridge details how quickly affluence can turn to dust. The song is based on real happenings of The Great Recession, where the rich and powerful that caused the mess get richer while the common man and woman take the brunt of the consequences. American dReam is written in personal, autobiographical terms, even taking on the health insurance industry in the process. The song is one mass of disillusion with what had long been thought the greatest nation on Earth.

One Floor Taller is a call to rebuild the Twin Towers in New York City, using the tendency in American History to continue to fight and build. Bridge equates this American tenacity with a tribute to all who have died so that America would grow and survive. The song is a strong testimonial of patriotism and love for America and is very well written. Sonic Bridge offers up a bit of Mix Tape Magic with I Wait For You, a warm and poetic song of devotion that could end up as a wedding favorite if the word gets out. Same Sex Marriage gets a few chuckles by taking a different perspective on the entire issue. This is a great tune with a fun twist. Bridge even gets into the realm of global warming, with a fantastic story about one highly improbable consequence on The Polar Bear Giraffe. Bridge closes out with The World I've Been Waiting For, a musical moment in time that recounts the feeling of looking down on the world from the top of 10,000 foot peak. The sense of awe and magic for the narrator is palpable, as Bridge places the listener firmly in the narrator's moment.

Sonic Bridge plays with strong melodies and poetic words and do both well, but it's his ability to create a world or scenario around the listener that distinguishes him from other singer/songwriters. If you listen with your eyes closed, you might become convinced that you could simply open them and walk out into the worlds and moments that Bridge sings about on American dReam. The fact that many of his themes are universal helps, but Bridge has a singular ability to find that one detail in his lyrics that makes the moment real. This is not a gift that can be learned or taught. American dReam mixes serious social commentary, humor and fantastic songwriting to create a listening experience you won't soon forget. American dReam is magical; a Wildy's World Certified Desert Island Disc. Don't miss out on this one!

You can learn more about Sonic Bridge at http://www.sonicbridgemusic.com/, where you can purchase American dReam using the Nimbit application.
Posted by Wildy at 5:37 AM

I couldn't agree more!!! What a thoughtful review, for an extremely gifted writer....well done Marc and Wildy!!!
Peace and light, Lori Diamond