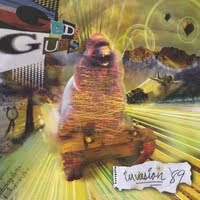 Ted Nott (vocals/bass) and Daniel Villarreal Carrillo (drums) travel under the name God's Guns, mixing elements of Rock, Jazz, Funk and Classical music into a dynamic and wide-ranging musical melting pot on their debut album, Invasion '89. The Chicago duo claim influences as diverse as Fela Kuti, Janes Addiction, Nine Inch Nails, The Mars Volta and Miles Davis. Wrap it all up in a grunge-flavored sensibility and you have a sound that's not quite like anything else currently out there.

God's Guns open with Ruby Ridge, a piece of Funk-driven rock with minimalist instrumentation (bass, drums & vocals). It's organic dance rock if you can imagine Pearl Jam playing with P-Funk's bassist sitting in. God's Guns shows a progressive leaning toward the end of the song that bears out later on. Invasion 89 features highly complex rhythms drawn from Jazz and Afrobeat styles, but musically it's all over the map.) God's Guns get expansive on Gutters Eye Blue, a melodramatic piece built around an almost derelict depression. Drum and bass fill the core here, with the vocal and violin dueling in a form of raw, forlorn grace.

God's Guns discuss the fall of New Orleans on Skeletons Of Louisiana Streets. The song is done beat poet style with sparse musical accompaniment, and focus on the moral and social degradation of the city rather than on a specific event such as Hurricane Katrina. Fires In The Fall finds the band in an introspective ode to a friend who has passed on. Driven by acoustic guitar and a dramatic vocal line reminiscent of some of Eddie Vedder's better stuff. Same Sinatra, More Insane features a searingly dramatic vocal line, but the song itself gets a bit messy. Petroleum gets messy but in true Progressive Rock circular style and ends up sounding more Psychedelic than anything. Puppet Show is a deep mess, running all over the map. It sounds as if God's Guns is more concerned with construction than progression here.

God's Guns turn out a solid if uneven effort in Invasion 89. The drums and bass setup with occasional violin or guitar is interesting, but wears as the album progresses. It seems as if may have worn on God's Guns as well, as the second half of the album is nowhere near the quality of the first half (with the exception of Fires in The Fall). When God's Guns are on their game they are an engaging band with a unique sound. These guys are definitely worth checking out, although individual songs may be hit or miss.
Rating: 3 Stars (Out of 5)

You can learn more about God’s Guns at www.myspace.com/godsguns or http://www.godsguns.com/. You can purchase a copy of Invasion 89 through CDBaby.
Posted by Wildy at 6:03 AM