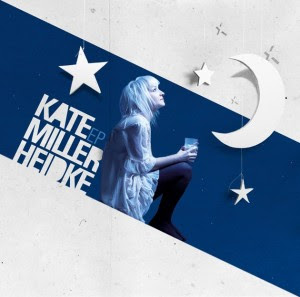 Kate Miller-Heidke is nothing less than a superstar in Australia. The Brisbane native's album Curiouser has lit up the ARIA and iTunes charts in Australia, going Gold and spawning at least two top-40 singles. Heidke and her guitarist/songwriter/partner Keir Nuttall also won the International Songwriting Competition grand prize, impressing a judging panel that included Tom Waits, Robert Smith (The Cure), Neil Finn and Ray Davies (The Kinks). Categorizing Miller-Heidke is in itself a process. If you took the in your-face musicality and quirkiness of Nellie McKay, the range of Kristin Chenoweth, the charm of Betty Boop and the beauty-to-bombast capability of Kate Bush you'd have someone who maybe sounded a bit like Kate Miller-Heidke. After the initial comparison all bets are off, however. Miller-Heidke strives to make music that makes the listener feel something; Catchy is great but empty doesn't fly. Sony Music will release Kate Miller-Heidke's Curiouser to North American audiences in 2010, but for now they've released the digital only EP through iTunes. It's time to get your feet and get to know Kate Miller-Heidke.

Kate Miller-Heidke is part post-modern Punk/Folk poet and part Flapper showgirl on EP. Her distinctive voice reaches notes not often found in pop music (and she actually hits them head on rather than glazing by them in histrionic runs as with coloratura divas such as Mariah Carey). Her fast, tight vibrato is also a bit unusual in pop, recalling, at times, Glinda The Good Witch from The Wizard Of Oz. These things aside, Miller-Heidke can flat out sing like an angel when she wants to, but she can also get in your face and growl, rap, yelp or roar. The first song on EP is Caught In The Crowd, the song that won the International Songwriting Contest Grand Prize. It's a charming song about what we miss out on by following the crowd in high school. Miller-Heidke gives pictures of some of the folks who were marginalized in high school; and tells her own tale of betrayal in name of being in the in crowd. The song is an apology and a coming-of-age, and is extremely well written with a distinctive melody and strong vocal harmonies.

Miller-Heidke takes on the narcissistic tendencies of the Baby Boom generation on Politics In Space. Her voice is inspiring here, and the message is firmly delivered with flashes of wit as sharp as any stiletto. On The Last Day On Earth, Miller-Heidke offers up a fantastical day dream that illuminates the power and fragility of love against the backdrop of the destruction of the world. The song itself is very pretty and moving in spite of the fantastical setting. Words is a tough affirmation of self. Miller-Heidke goes large here with a touch of glam in a wonderfully entertaining turn. The song is different enough to catch on in the popular realm and inspire a host of copy-cats without giving itself away to popular mores. EP closes out with Are You F#cking Kidding Me, one of the funniest post-modern relationship songs of the digital age. Miller-Heidke is enchanting and rip-roaringly funny in a song that essentially everyone under 30 (and most over-30) can identify with.

Kate Miller-Heidke has a magical touch that can't be ignored. She writes close enough to the popular realm to be accepted by it, but is too much her own to ever be a Pop artist. Miller-Heidke's songs show intelligence, wit and a fiercely imaginative and creative nature that isn't going to go away. EP should inspire a lot of interest in the forthcoming North American release of Curiouser. In the mean time, it is an inspired introduction to an artist who might just turn out to be one of those once-in-a-generation talents. EP a Wildy's World Certified Desert Island Download. Don't miss it.
Rating: 5 Stars (Out of 5)

You can learn more about Kate Miller-Heidke at http://www.katemiller-heidke.com/ or www.myspace.com/katemillerheidke. You can download EP from iTunes.
Posted by Wildy at 5:10 AM

Kate Miller-Heidke is one of the most crazy, amazing and talented artists i've ever come across- and her live performances are even BETTER than her recorded tracks. She never ceases to amaze me!