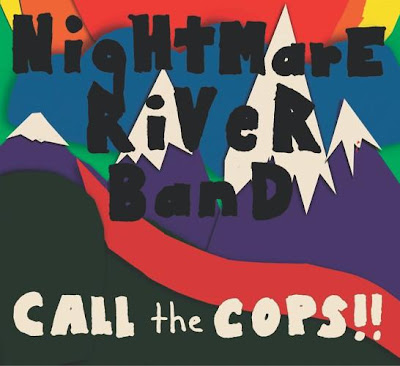 “We are The Nightmare River Band, and we are coming to your town whether you like it or not.” This is the quote that closes the brief bio on Nightmare River Band’s web page, and it is very revealing of the band. Call it moxie, chutzpah, cajones, or what else you might, Nightmare River Band succeeds on musicality, but makes it work by getting your face and turning it up a notch. Former Fire Flies Matt Krahula (vox, acoustic guitar) and Seth Faulk (drums, vox) teamed up with The Designated Drivers alumni Kris Hayes (guitar, vox) and The Freams’ “Tall” Andy Tekverk to form Nightmare River Band. The band’s debut album, Call The Cops!!, takes Celtic, Punk and Folk elements and rolls them into one dynamic ball of fun.

Call the Cops!! opens with Center Of The Earth, an Irish drinking tune with electric guitars with a dark aspect. The instrumentation and vocal harmonies are outstanding, and the exuberance level from the band is off the charts. Jeffrey Dahmer continues in the vein of drinking tunes, but the title is really a lyrical afterthought. Dreamin' is a strong Rock tune with Pogues-like energy. It sounds like Nightmare River Band had a blast recording this tune, and I bet its killer live. To top it off, Matt Krahula is in great voice here with a smooth sound and just a hint of whiskey rasp. Pictures Frames & Photographs continues the strong songwriting; the song is very musical, intelligently written and has impressive vocal harmonies.

To The Sea takes on the age-old practice of burying the dead in the ocean. This dark subject is set against a driving Punk/Celtic tune that will have you running for the pits ready to pogo the night away. Summer Sun Sets takes a disco beat, surf guitar and horns and crafts them into an emotionally tumultuous but enjoyable listen. The song Procreate has a title with significant potential, but the energy just doesn't get it there. It's decent, but the title builds an expectation that just wasn't quite met. Call The Cops!! is a fun song with a huge tableau including horns and vocal harmonies. This is a pure Pub/Bar tune and probably brings the house down live. Nightmare River Band closes with the quiet epilogue, Where Do We Go. It is a radical change from the rest of the album in both style and volume, but reflects the introspective nature of the artist once the music stops. It's a lovely tune worth sticking around for.

Call The Cops!! is a great listen. Nightmare River Band plays with great musicality in a quasi-Lo-Fi environment. The arrangements might sound a bit messy once in a while, but this is more by design than mischance; the core of the sound is the band's exuberance. There isn't a track here where it doesn't come across that Nightmare River Band thoroughly enjoys what they're doing. Even on the last track, the commitment is 100% apparent to the listener. The instrumentation on Call The Cops!! runs a bit light at times, but the gaps are filled in with strong vocal harmonies. Nightmare River Band also has a sense of humor that runs through their songs; when it's subtle and inherent in the song it works wonderfully. There are a couple of times here when it sounds like maybe they're trying to be funny or ironic; such attempts don't work quite as well as the subtle, mischievous spirit that runs through the album. Fans of Captain Tractor will love Nightmare River Band. These guys can play and sing, and they're so exuberant it rubs off on the listener. Nightmare River Band is probably best heard in a pub with a raucous Saturday night crowd, but they do an outstanding job of capturing that energy and sound on Call The Cops!! Make sure you check them out; you won't be disappointed.

You can learn more about Nightmare River Band at www.myspace.com/nightmareriverband. You can order a copy of Call The Cops!! Through CDBaby.
Posted by Wildy at 5:30 AM