Review: Anthony Toner - The Duke Of Oklahoma & Other Stories 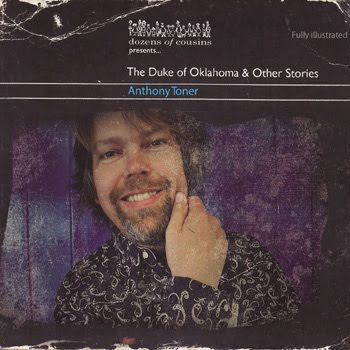 Anthony Toner - The Duke Of Oklahoma & Other Stories
2009, Dozens Of Cousins

Anthony Toner is a Belfast, Northern Ireland singer/songwriter whom we first discovered on the city of Belfast's Sounds Of The City compilation earlier this year. Toner is one of the best at his craft in Belfast, appearing with folks such as Benny Gallagher, Iain Archer, Pat Alger and Frances Black. He's also begun to build a following in Eastern Canada with acclaimed performances in Quebec, Ontario and British Columbia. Toner's sophomore album, The Duke Of Oklahoma & Other Stories follows on the heels of 2008's A Sky For Every Day, which produced two radio hits in Sailortown and Marion.

Toner leads off with one of the weaker tracks on the album. You Like Boats sounds like an allegory for someone who likes the chase but not commitment. The song is done in a decent Country arrangement but ends up just a bit too bland. The Duke Of Oklahoma is a great story song about a guy who can never win. The Duke's expectations of world around him are never met, and whatever he touches goes bad. The song itself is very catchy and enjoyable. Well Well Well is one of those songs where I have to say I have no idea what it's about, but I like it. Toner shifts into more traditional Country music territory with Whatever's On Special. The Eagles-esque California Country song is set in the neighborhood pub, where sorrow begets beer and beer begets sorrow. Toner hits a bit of songwriting magic on Merci Beaucoup, capturing the "floaty" feeling of love perfectly in song. Merci Beaucoup has a universal feel and melody that could be a hit in any time and any place.

Road To Notown is a song about how time and good intentions can steal away our potential and dreams. The song is highly melodic and well-written, and perhaps a little too true for the comfort of some listeners. Things on The Duke Of Oklahoma & Other Stories get a bit uneven in the middle, but Toner bounces back with Some Day You'll Thank Me For This, a song about maintaining good boundaries in a relationship gone wrong. This is a well-written and intelligent tune about staring the easy road to destruction in the face and having the strength to turn away. Toner takes a stab at the trucker song with Closer To Home. The theme here is a classic one: once you finally figure out where it is you need to be you just can't wait to get there. Gabriel, You Worry Too Much has a classic country feel and subtly outlines just how talented a songwriter Toner really is. The sound and story here are simply wonderful. Toner closes out with a live rendition of his hit Sailortown. It's a song about a small town boy who sees life passing him by. He knows its happening and is accepting of his face but isn't shielded from the sense of loss. It's no surprise this was a hit; it's an amazing piece of songwriting.

If Anthony Toner is representative of the sort of songwriting and performing talent coming out of Belfast then it won't be long before it's considered a musical hotspot. The Duke Of Oklahoma & Other Stories is an incredibly nuanced and mature work, where the story-telling and music are of equal importance and impact. Toner's comfortable singing voice and affable delivery make for great listening. There are some weak moments here, but they are easy to overlook in light of the whole. Make sure you take some time and get to know Anthony Toner. I have a feeling that Belfast isn't big enough to hold him for much longer.

You can learn more about Anthony Toner at http://www.anthonytoner.net/. You can purchase a copy of The Duke Of Oklahoma & Other Stories in his web store.
Posted by Wildy at 5:00 AM