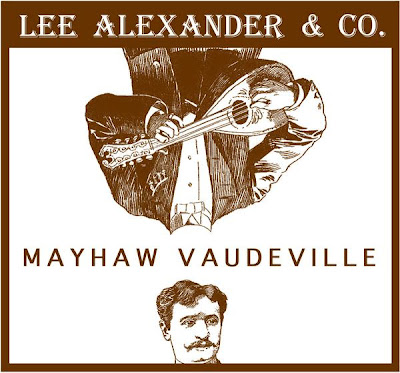 Houston, Texas’ Lee Alexander writes from the heart of Texas in his heart. Using the same wit, intelligence and rustic flavor as folks such as Steve Earle and Lyle Lovett, Alexander has a reputation for crafting masterful musical stories. With a 2007 Independent Music Award for his debut album, Out Of Place, Alexander follows up with his sophomore effort, Mayhaw Vaudeville.

After the brief prologue of Ballnese Room (Overture), Alexander gets things rolling with Miles Between; a Folk/Pop gem with a big, pretty chorus. Reminiscent of later Great Big Sea and Pat McGee Band, Miles Between deals with the dissatisfaction of being in a relationship with someone who just doesn't not live up to expectations. Mayhaw Wine mixes early Rock N Roll and R&B elements in an acoustic Folk setting. The song has a definite sway and plays like an instant classic. These Days has one of the best melody lines on the disc, sounding a bit like Blue Rodeo meets The Cash Brothers in a highly enjoyable turn. My favorite song on the disc is Wheel; a paean to the pursuit of dreams and ambitions that recognizes that life is a gamble. The roulette wheel is used to illustrate the point here in poetic, intelligent and melodic bit of acoustic Blues and Folk.

Okemah Moon sounds about as classic country as you can get. It's a story about forbidden love and the almost certain conclusion it will come to. Somewhere, the spirit of George Jones smiles down on this song. Alexander lets us eavesdrop on one side of a conversation about escaping small town life in Carol Ann, a poignant tune full of ugly truths. The song needs a companion piece, however, as this is a sliver of a very good story that could stand telling. Alexander proceeds to cover the traditional Liverpool, England anthem Maggie Mae (not the Rod Stewart song). A favorite of sailors for better than a century, Maggie Mae tells the story of a prostitute and was long the unofficial theme song of Liverpool. Alexander's version is compelling and reserved; very well done. Union Street heads right for the Mix-Tape Magic pile in a touching performance where Alexander is in his absolute best and most velvety voice. Alexander sounds a bit like the Beatles on Mr. Walker's Epilogue, creating a near-perfect Pop tune with great vocal harmonies and a sound that could only be inspired by The Fab 4. Green Room Mirror (Curtain Call) is a great example of melodic and melancholy Pop. The story-line is benign compared to the beauty of the melody. Alexander closes out with an untitled track of a Tin Pan Alley jazz tune that might be called Paradise For Me. It's a brief epilogue but done perfectly to era and very entertaining.

Lee Alexander & Company display serious musical chops on Mayhaw Vaudeville. There's intense love for the sounds of bygone eras evident here, but also a fresh energy that enervates both the songs and the listener. Alexander has one of those voices you simply don't want to stop, and the arrangements are both pleasurable and challenging. Make sure you spend some time with Lee Alexander & Co. and Mayhaw Vaudeville. It's a bit off the beaten track but worth every step.

You can learn more about Lee Alexander & Co. http://www.alexandersongs.com/ or www.myspace.com/alexanderlee. Mayhaw Vaudeville is available through Noisetrade on a pay-what-you-wish arrangement for download, or you can get the download for free by providing the email address of five friends! CD copies are available at shows, but if you contact the band through their MySpace page I'm sure they'll be happy to help you out.
Posted by Wildy at 5:10 AM