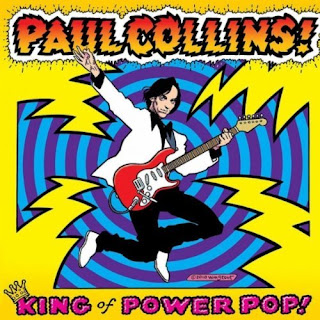 Paul Collins might not be the forefather of Power Pop but he certainly was on the committee. Collins spent much of the 1970's working with Peter Case in both Nerves and The Breakaways before forming The Beat (Paul Collins Beat) in 1979. Collins gets back to his roots on his latest album, King Of Power Pop, due out on August 24, 2010 on Alive Records. King Of Power Pop features Eric Blakely on guitar and backing vox, Producer Jim Diamond (The White Stripes, Dirtbombs, The Go) on bass and Dave Shettler on drums. Guest appearances by Wally Palmar (The Romantics) and Nikki Corvette (Nikki & The Corvettes) are also in the offing.

King Of Power Pop opens with "C'mon Let's Go!", with Collins recalling simpler times in a classic rock n roll courtship song. "Do You Wanna Love Me" is catchy early rock n roll with a blues base that will get your toes tapping. "Hurting's On My Side" shows off Collins' melodic sensibilities in a melancholy but poignant bit of songwriting that's a nice change of pace. "Don't Blame Your Troubles On Me" is catchy, guitar-driven rock; a great listen. Collins channels pure nostalgia on his cover of The Box Tops' "The Letter". Collins manages to make the song his own without changing a thing, a nice feat. "Kings Of Power Pop" is a fun tune about how Collins came to be where he is today; it's the rock n roll dream that anyone who's ever strapped on an electric guitar has had. "This Is America" ends up sounding like a recasting of Billy Joel's "We Didn't Start The Fire". The chorus is different, but the mode and method of the song and the list-filled lyrics are just too close to not be compared. Collins closes with "You Tore Me Down", a bland dictation of 1960's rock style that just doesn't have the pizzazz you'd expect in a closing number.

Learn more about Paul Collins at http://www.thepaulcollinsbeat.com/.  King Of Power Pop is available from Amazon.com on CD

.  The album is also available from iTunes.
Posted by Wildy at 4:50 AM

It's weird, "You Tore Me Down" is actually a cover of a song by an underground rock band called The Flamin' Groovies. On the positive side, Collins' cover version of "The Letter" is a harder-rocking version of The Box Tops' hit song from the 60s and a fitting tribute to the late Alex Chilton from Box Tops and Big Star. Collins' song "Many Roads To Follow" was originally a song he recorded and performed with Peter Case in The Nerves. The song "Hurting's On Me" reminds me of Lucinda Williams and Steve Earle.