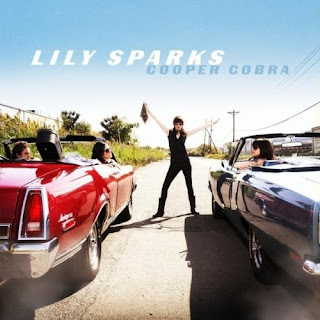 Get out your studded leather pants and oversized shirts. 1980's rock n roll is back with a vengeance, and New York City quartet Lily Sparks is leading the charge. Laying down a classic rock n roll sound is the mission of Lily Sparks, who have been creating sparks on the New York City Indie scene for two years now. Lead vocalist Niamh (pronounced "neev") is a product of Ireland; a classically trained vocalist who can go from a whisper to a scream in nothing flat. Niamh has sung everything from classical to rock to musical theatre, but seems most at home on stage between the two glitter guitars of Lily Sparks. Nikki 7 plays rhythm and lead guitar; the product of The Berklee College Of Music has been seen around NYC in the past with bands such as Cherry Red, Soap Opera Villain, The Mynks and Fluffy. KG* star wields the other glitter guitar in Lily Sparks, and has her roots in the punk scene. In their two years together Lily Sparks have gone from occasional gigging to headlining Webster Hall and even won the East Coast Finals of the Emergenza Festival. This won them a trip to perform at the Taubertal Music Festival in Germany, where Niamh won the award for Best Vocalist. Lily Sparks put their sound on the record for the first time in 2010 with the EP Cooper Cobra.

Cooper Cobra opens with "Stars", a classic rocker about the little things in life ("stars, guitars and muscle cars"). It's a great tune that could have been a top hit circa 1983 and would still get more than nominal interest from classic rock and AOR stations today. Niamh is indeed everything she's billed to be, with an unbelievable voice and the sex appeal of a confident lead singer. "Let Go" dials things down a bit as a charged invitation to intimacy. Niamh projects a sultry and confident vulnerability here that's surprising and adds an extra charge to the song. "Walk Away" is a dynamic rocker that looks back at an old relationship with longing and regret; A wish to return to what once was. Niamh belts and wails her way through this one in fine rock and roll fashion, treading the valley somewhere between Chrissie Hynde and Ann Wilson. "Where Are We Today" is a rueful revisit to where two former lovers are; and is perhaps a follow-up to "Walk Away". It's a solid track, but the weakest one on the EP. "The Girls" is a love song to New York City; and is likely to become a fan/concert favorite.

Lily Sparks has it all. Solid musicianship, a dynamic lead vocalist, a sound steeped in classic rock tradition and a vitality that keeps it fresh. While Cooper Cobra may sound dated to some, it's a sound that still speaks to an awful lot of people. The EP seems to engage the energy of Lily Sparks, but it seems likely that the energy you hear here is just the tip of the iceberg. Lily Sparks is a band you have to hear live to really believe. For those of you not in the tri-state area, Cooper Cobra is a more-than-acceptable stand-in for the real thing.

You can learn more about Lily Sparks at http://www.lilysparks.com/ or www.myspace.com/lilysparksrock.  Cooper Cobra is available from Amazon.com as either a CD

.  Downloads are also available from iTunes.
Posted by Wildy at 5:30 AM