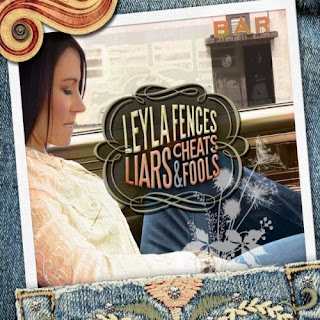 Leyla Fences is an Argyle, Texas singer-songwriter who strives to get back to the roots of modern country music while writing lyrics that are up-to-date and relevant to day-to-day life. Eschewing the "happily ever after" tone of modern pop-country, Fences uses her music to talk about real life situations, broken hearts, cheating partners and losing life to work while keeping the female perspective front and center. Fences doesn't have a perfect voice, and doesn't varnish it with corrective software, keeping her performances as real as her lyrics. Her debut album, Liars, Cheats & Fools is therefore refreshing in approach

Liars, Cheats & Fools opens with "Let Him Go", a highly danceable bit of rockin' country about cutting your losses and moving on. It's an entertaining opener and has enough life to it to catch the attention of country radio program directors. Fences is in fine voice on the opener, although her sound shows a distinct lack of training and occasionally breath control. In this case her vocal idiosyncrasies do more to make her memorable than turn listeners away. "Hardly Livin'" is an ode to working class perseverance and the sacrifices it brings. It's a mildly danceable tune with a solid backbeat and some impressive piano fills around the edges. "The Net" is a positively themed song about taking chances to make your dreams come true. It's a decent tune, although it smacks of self-help cliché.

Fences gives the kiss off to a two-timer whose come around again on "Love Doesn't Work Like That". While the vocal line shows off Fences' weak spots, the song is catchy enough and has enough guts to become an anthem for those who have been part of a romantic yo-yo relationship. "Dancing With You" is a mellow country love song; solid and a bit typical of the genre. It's a decent song but feels heavy from the pacing and the distinct flavor of Fences' voice. "Upside Blues" is a pure drinking anthem for the sore-hearted, allowing whatever it takes to get over a loss. It's a danceable tune that has an anthemic feel. "The Other Side" puts "the grass is always greener" into song from the perspective of a mom. Fences' vocal quirks are fully on display in one of the more difficult vocal lines to listen to on the album. The song itself is heaped with cliché; well-written but predictable to a fault.

"The Fool" touches on infidelity and tit-for-tat exchanges in a cynical game of one-upmanship that feels somewhat flat. The arrangement is energetic enough; danceable and alive, but the lyrics and vocal line don't quite have the vitality to match. "Maybe" is classic waffling over a relationship in song. It's one of the more emotionally authentic sounding songs on the album and reflects well on Leyla Fences. "Two's A Crowd" works well as a declaration of self; espousing the concept that sometimes you don't need to be in a relationship to be happy. Highly danceable, "Two's A Crowd" has an innate pop sensibility that will inspire you to hit repeat. Fences closes with "Life Is Funny", a mildly catchy tune that's too straight-forward for its own good.

Leyla Fences has a voice that you'll remember after you've heard it once. It's most-always a pleasant one to listen to, although Fences does show a lack of vocal training in trills, runs and anywhere else where her vocalizations require a high level of breath control. Her deep alto with distinct nasal qualities is an intriguing sound, and from a songwriting perspective much of Liars, Cheats & Fools is solid. Fences may not be the most poetic or romantic lyricist in the world, but she tells it like it is without pretense or gloss. This style may not fit the CMT paradigm these days, but the classic sound and unvarnished approach is going to appeal to a lot of the regular fans out there that wonder "what happened to country music?"

Learn more about Leyla Fences at http://www.leylafences.com/ or www.myspace.com/leyalfences.  Liars, Cheats & Fools is available from Amazon.com as a CD or Download

.  The album is also available digitally from iTunes.