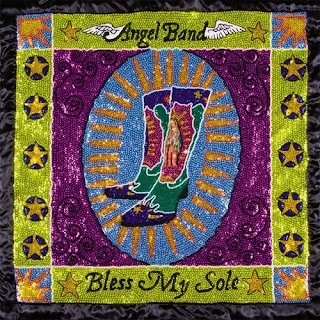 Angel Band grew out of a partnership between vocalist/songwriter Nancy Josephson and musician David Bromberg, starting out seven years ago as jam session that Josephson didn’t even want to attend. While the personnel in Angel band has changed around over the last several years, if appears that Angel Band has finally perfected their sound with the addition (over time) of vocalists Kathleen Weber and Aly Paige. This sound is vibrantly on display on their most recent album, Bless My Sole.

Bless My Sole opens with "Hope Is On The Way", a secular gospel tune in an Americana/rock arrangement that was inspired by Barack Obama's presidential run in 2008. Josephson has an amazingly soulful country/rock voice, and the vocal triads here will blow you away. The song is somewhat low-key but catchy for all that; a great opening track. "Same Boat" mixes gospel, country and blues in a sociology lesson about minimizing the differences between people in a society that's artfully done. "Didn't See It Coming (When The Levee Broke)" calls out the effects of Hurricane Katrina on those in the small parishes around New Orleans who are often overlooked in public discussion. The classic country arrangement tinged with zydeco sounds is brilliant, and this has to rank among the best (and least political) songs written about Hurricane Katrina and its aftermath.

"King Of Nothing" is Wilson Phillips gone country from a harmony perspective. The song talks about the sacrifices people make to become successful and how little they really gain. (I Feel) Lucky is dark, catchy country music with southern rock attitude woven in the seams. Crafted over an occasional R&B beat, the ladies of Angel Band weave angelic harmonies while the fiddle dances around their vocal fire. Occasionally a song will show up that's better heard than described. So I'll tell you to simply listen to "Fly Away Home" and be grateful for the experience; it's a thing of beauty.

"Black Tar Sway" shows the darker side of Angel Band while maintaining their bent for prolific vocal harmonies. "Deeds We Have Done" is a great blues tune with elements of bluegrass and gospel that you'll have on repeat. "Go Ahead And Go", while not the biggest tune on the album, might be the perfect vehicle to introduce yourself to the buoyant harmonies Angel Band are capable of. Delving into the sound of 1960's Motown female vocal groups with a vague country twist, Angel Band delivers a true "Wow" moment. Angel Band closes with "Bless My Soul", a gorgeous call for help in difficult times. It's not the sort of song you'd traditionally associate with beauty; being more of a melancholy-but-hopeful appeal, but Angel Band culls every bit of dark beauty they can from the song and sends it sailing to your ears.

Comparisons to Wilson Phillips, Crosby Stills and Nash and even The Dixie Chicks are going to happen, but the earthy tone of the songs on Bless My Sole set Angel Band apart. The various blends of musical styles herein may not be unique, but there aren't many bands in the popular sphere that can do so much so well. The distinctive mix of voices on Bless My Sole is stunning; you'll find yourself listening to Bless My Sole again and again in awe of the blends these three ladies create. And in case you're wondering, the rest of the band is equally good. There's no missing link here.

Learn more about Angel Band at http://www.angelband.net/ or www.myspace.com/theofficalangelbandsite.  Bless My Sole is available via Amazon.com as both a CD

.  The album is also available through iTunes.
Posted by Wildy at 6:29 AM