The Sleep-Ins - Songs About Girls & Outerspace 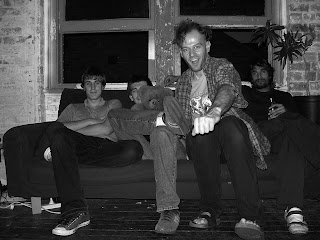 Sydney, Australia’s The Sleep-Ins have been through a lot of turmoil as a band. Three drummers and three guitarists have come and gone over multiple recording sessions and gigs. The Sleep-Ins have developed a reputation for catchy, quirky rock n roll. With members from Australia, the UK and the US, The Sleep-Ins are truly an international act. The Sleep-Ins documented their sound on their full-length debut for Ingot Records, the soon to be released Songs About Girls & Outer Space.

Songs About Girls & Outer Space is an absolute fuzz-fest, running the gamut from the garage electrics of the 1970's to the grunge sound of Nirvana with side trips into psychedelia and shoegaze rock along the path. The Sleep-Ins open with "Silver State", cutting their fuzzy guitar sound with a simplistic but catchy keyboard riff. "Silver State" is mildly catchy, almost counter-intuitively. Imagine Ween and Weezer meeting over drinks. "Angelina" is fuzz-rock with a catchy feel but the sound gets very muddled in the middle and stamps the life out of the song. "Chrome Skull & Matching Codpiece" could be a sonic tribute to Nirvana and the Seattle sound they inspired, full of anger, vitriol and grunge guitar sound.

"Running Out Here" maintains the Nirvana influence but adds a spacey, psychedelic twist to the sound. There's not a lot of stress on melody here; the songwriting is more observational than linear, creating the impression that some may even be somewhat random. "Tonya, Extraplanetary Spaceship Girl" plays like Ween covering a Clash tune. This time around The Sleep-Ins are catchy with a whiff of pop craftsmanship, but it's messy, bewildered pop. Chad Corley spends much of the song warbling just past the outer edge of his vocal range. "Desertsong" is a two minute psychedelic turn that's mellow and surreal; showing The Sleep-Ins' penchant for dark arrangements and dissonance. From here The Sleep-Ins fade into messy and unfocused territory with the upbeat Astro-Not and the sound-over-substance style of "Bug On My Face".

Songs About Girls & Outer Space could be taken as a fine example of how chemical intervention can influence the creative process. This perception may not be entirely without merit, but underestimates the distinctly dark (and occasionally pop-oriented) vision of The Sleep-Ins. This is not an album for everyone, but if you're looking for music that sales past the edge of prim pop without wandering into the forests of heavy metal or the urban jungle of modern rock, then The Sleep-Ins fit the bill nicely. The songwriting is somewhat unfocused, but The Sleep-Ins create a sonic impression with their music that's not without merits of its own.

Learn more about The Sleep-Ins at www.myspace.com/sleepins or http://www.sleep-ins.ingotrock.com/.  Songs About Girls & Outer Space is a pending release from Ingot Records, and can be pre-ordered on the Ingot Records website.
Posted by Wildy at 5:58 AM

Labels: Nirvana, The Clash, The Pixies, The Sleep-Ins, Ween, Weezer

There's no doubt, the dude is absolutely right.