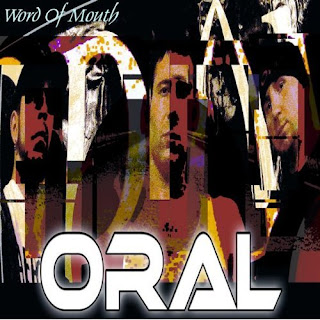 Pittsburgh’s Oral has been together since 2005, attempting to develop a sound that blurs the borders between modern rock and heavy metal while pulling in some elements of pop sensibility. Oral is in the process of completing their third album at this time, but sent along their second release, 2007's Word Of Mouth for consideration.

After a campy opening featuring a hip-hop beat and campy voice samples Word Of Mouth gets started with "Just Like Me", a testosterone-laden blend of heavy metal and rap. Oral gives it all over to cliche here, filling space with declarations in place of thought and wrapping it all in a wall of guitar sound. "Grind" is a bit more take, relying on a straight-forward alt-rock feel that's decent but fails to distinguish. "Loser" is an anthem for lost and misdirected souls who don't see hope in tomorrow; a decent enough track that's perhaps a bit too tame for its own good but melodically sound. That tameness sticks through "Numb" and "Unsaid".

"Looking Back" restores some chutzpah to Oral's musical resume with some bluesy slide guitar providing fills between vocal phrases. This stripped down sound is a welcome change of pace that dispels the stale feel that had settled over Oral. "Thank You" shows both intelligent craftsmanship and an emotional connection in the song, rising above the largely visceral nature of the album thus far. "One Last Time" is an angry anti-war rant from the perspective of a soldier who questions why he's so far from home. It opens with a marching cadence not uncommon in basic training, and ends with the narrator in a metaphysical morass about his purpose and the plans of others. Oral closes with a live version of "Live My Trouble", a mundane hard rock tune that fails to set Oral apart.

Oral sustains through thirteen tracks on Word Of Mouth with a sense for bland, monochromatic melodies and a middling intensity that's lukewarm at best. There's nothing terrible on Word Of Mouth, but there's not really anything that will really grab your attention either. Ironically the best track on the album is called "Loser", but even here the energy level just isn't where it should be. Oral may have a lot going for them live, but it just doesn't translate well on Word Of Mouth.

Learn more about Oral at http://www.oralmusic.com/.  The band does have a MySpace page, but as of the publication of this review www.myspace.com/oraltheband appeared to house several malicious downloads, so I'd advise, for the time being, to stay away.  Word Of Mouth is available on CD from CDBaby.com.  Downloads are available from Amazon.com