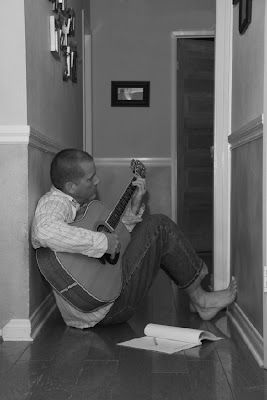 Matthew Stemme is a singer/songwriter from Valencia, California. He’s also a pastor at NorthPark Community Church, a husband and father. Stemme isn’t big on the biographical information on his website, but he sent us a self-titled EP for review. We’ll follow Stemme’s lead and get right to the songs.

Stemme opens with "God's Big Backyard (Jack's Song)", a musical representation of a young child's view of Heaven. Stemme's musical vision here is sweet, and delivers a message of faith in sentimental terms that eschew the hyperactive delivery that envelops so much of contemporary Christian pop. His mild country-style delivery is also quite apt in the moment. "Laughter In The Hallway" is a sentimental look back at family life once the children have grown. Written from the perspective of a dad who dwells happily in the members his family made, it's a heartfelt tribute to love and family, and all the gifts and trials they can bring. "She's On Her Own" pays tribute to his little girl on the day she heads out on her own. It's a song of hope and sorrow; hope for her future and sorrow for the childhood she's outgrown. Stemme closes with "Mooly Cow Lullaby", a take on a children's rhyme that is sweetly sung by an uncredited female vocalist. As Stemme's EP is all about family "Mooly Cow Lullaby" is both a fitting and touching closing number.

Matthew Stemme draws forth from a well of life and love-inspired emotion on his self-titled EP. There's a strong Judeo-Christian ethic at work here, even if it only openly appears on the first track. Rather than beat you about the head with his beliefs, Stemme simply tells you who he is on four wonderfully well-crafted songs. His personality and beliefs run deep in the veins of each song, serving as an inspirational and touching testament to a life lived in service to the ones Stemme loves. With that said, Stemme's EP doesn't drip with gooey emotion; it's simply an honest exposition of the heart with no sugar added and no saccharine aftertaste. Matthew Stemme will appeal to the Delilah and Lifetime Movies for Women crowd, but also will appeal to anyone who likes honest emotion and thought in a songwriter. Stemme will leave you wanting more.

Learn more about Matthew Stemme at http://www.songsfromhome.com/.  Matthew Stemme will eventually release a commercial album or EP of this material I suspect.  For now you can listen to his songs at StartMySong.
Posted by Wildy at 5:10 AM