The Switch: Music From The Motion Picture 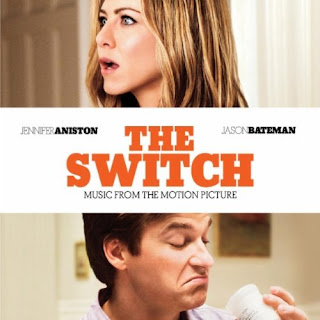 The Switch: Music From The Motion Picture
2010, Rhino Records

The Switch is a new romantic comedy starring Jennifer Anniston and Jason Bateman, with Jeff Goldblum, Patrick Wilson and Juliette Lewis. Directed by Will Speck, this tale of artificial insemination (with a turkey baster) and romance has turned into a mild hit for director Will Speck on the comic performances of those involved. Rhino Records has released a soundtrack in support of the film featuring tracks from artists such as Dan Hartman, The Bar-Kays, Jamiroquai and The Eels.

The Switch's "Opening Titles" feature keyboard pulses reminiscent of The Who in a sub-two minute scene setter that resolves into a pizzicato-based ambient sound collage. Dan Hartman's "Instant Replay", a Gold Record when first released in 1978 is pure disco gold. The Bar-Kays step up next with "Freakshow On The Dance Floor", another bit of disco magic that helps to firmly establish the soundtrack as an experiment in retro dance. Nu Shooz' "I Can't Wait" gets into the sonic excess of the era, while Sunrider's "The Bomb (These Sounds Fall Into My Mind)" will have you up and dancing the second it starts. The highlight of the soundtrack is The Quantic Soul Orchestra's "Pushin' On", featuring Alice Russell on lead vocals. This is early disco steeped in Motown sound, before disco became disconnected from its own R&B roots.

Jamiroquai brings a subtle sense of funk on "Little L", spinning out a dance number with a retro feel that should find solid footing in the dance clubs of today. Alex Wurman's guitar/piano instrumental "Lice" is a welcome diversion from the flashy disco balls that hang heavily over switch, resetting the musical palette for what is to come next. Lavender Diamond is a treat on "Open Your Heart" as is Jaymay on the folksy "Sea Green, Sea Blue". Jaymay actually has one of those voices you'll yearn for once you've heard it; a sure sign that more than a few readers/listeners will seek her out before all is said and done. Mojave 3 go astro-ethereal on the Ulrich Schnauss mix of "Bluebird Of Happiness" before the Eels bring their brand of melodic madness on "All The Beautiful Things" and "Numbered Days". The soundtrack closes with Bibio's "Lover's Carvings", an intriguing guitar-driven tune that's more about rhythm and feel than distinct melodic progression. Even once the singer kicks in more than halfway through the song is more about feel than presentation. It's a pretty but appropriate ending to an album with schizophonic feel.

If the soundtrack to The Switch is any indication, the movie has little sense about it. While there are some great performances here, there is no flow to the album as a whole. It's as if songs were picked almost haphazardly rather than on the basis of any coherent development of plot or at least progression of events. In other words it plays like a cynical attempt to capitalize on the movie by selling a collection of songs with little sense or sensibility about them (as a collection). We won't venture to advise readers on what to buy or when, but it wouldn't be surprising to see copies of this soundtrack in the cutout bins within a year.

Learn more about The Switch at http://www.theswitch-movie.com/.  The Switch is available on CD

and as a Download from Amazon.com.  You can also find it on iTunes.