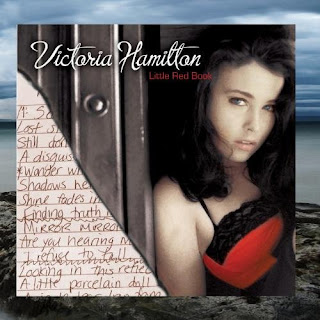 You can’t help but think big when you listen to Victoria Hamilton. The 18-year old Connecticut native with the big voice has already attracted the attention of big name producers. Her debut EP, Little Red Book came about with producer Rob Fusari (Lady GaGa, Beyonce) at the helm. While it helps to have a well-known producer behind you, its Hamilton’s powerful voice and 4-octave range that stops people in their tracks and burns an impression of the singer on your psyche.

Little Red Book opens with "I Was Wrong" a pop/R&B ballad of regret that's very much radio-ready. It's not the best track on the disc, but is a great opener and solid selection for a first single. Hamilton has a sultry, robust alto voice. It's hard to tell because of the production techniques used how much of that voice is truly Hamilton, as voice doubling and other effects are used, but if that's all Hamilton her voice is absolutely striking. "Innocent" is a mildly commercial exploration of new experiences from the view of a young adult. The song has a solid dance beat and sounds like perfect soundtrack fodder for a prime-time teen soap opera.

"Hurry Up, Kiss Me" seems like the most likely hit single on Little Red Book. It's a great piece of songwriting ensconced in the mix of pop and R&B that Hamilton seems to favor and shows off her big voice. The song also has that impetuous pop sensibility that makes a great radio track. Hamilton seeks emotional penance on "Forgiven", a slow ballad that mixes melancholy, hope and regret. It's the chorus that makes this one a winner; you'll find it playing back in your mind once the song is over. Hamilton gets caught short on "Mirror, Mirror", where the verses seem to sputter between a bland arrangement and a half-hearted vocal effort by Hamilton. She and the song collectively come alive on the chorus in a fit of angst. It's not the song itself; a lot more could be done here.

"So Far, By Far" might just turn out to be the breakout song for Hamilton. Her big soulful vocal over a classic sounding soul arrangement with a modern twist is likely to turn some heads. The best overall performance on Little Red Book comes on "10,000 Things". Hamilton strips down the arrangement a bit, getting both her heart and head into a song about the value of a relationship and all of the things that can interfere. It's a great bit of songwriting that's wise beyond Hamilton's years and bodes well for her future. Hamilton closes out with a remix of "So Far, By Far". While realizing that in the pop game getting your song into the dance clubs can do a lot to drive album and download sales (and therefore radio play), sometimes it’s best to leave a good song alone. In this case the remix detracts from the power and sultry beauty of Hamilton's voice, making her sound more like a bubblegum pop idol than the bonafide singer with a big voice she appears to be.

Victoria Hamilton walks the thin line between artistry and fealty on Little Red Book. Assuming the voice is all hers, Hamilton represents a new generation of classic pop singers with roots ensconced in R&B. The tricks of the pop trade often require minimizing the voice for effects and styles that don't necessarily correlate with the talent of the artist. Hamilton runs into this fork in the road on Little Red Book, and she seems to be attempting to walk both paths at once. Ultimately she will have to choose; it's a question of reaching for the big star and backing your way into what you are best at, or doing what you love and saying que sera sera. Little Red Book is good, and Hamilton is scary good, but the strain of trying to walk two paths does show through the cracks at times. And while Fusari is obviously very good at what he does, the best producers know when to tweak and when the let the artist's performance stand for what it is.   It's worth following Hamilton a ways along her path to see what she does next.

Learn more about Victoria Hamilton at www.myspace.com/victoriahamilton.  Little Red Book is available from Amazon.com as a CD

.  Downloads of the album are available from iTunes.
Posted by Wildy at 5:00 AM