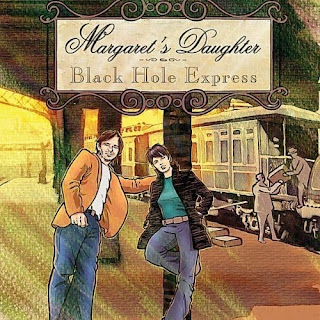 Black Hole Express opens with the extraordinarily smooth orchestral folk/pop of "Black Hole Express". Margaret's Daughter shows distinctive pop sensibility with a reserved delivery and a vocal mix reminiscent of The Indigo Girls. "Crazy (When I'm With You)" has a bit gutsier feel, and may remind listeners of Heart. In the midst of the rock dynamic here is that ever-present reserve which takes on a more intriguing tone here. Vocalist Ami has a fine alto voice that's cool and collected with beautiful tone. "Wind Blows" is the story of a restless soul who can never feel at home because she gives herself away too easily. It's a nice little window on a life in a gentle folk/pop arrangement.

"Backbeat" is catchy and mellow; a song of love, need and devotion that's finely honed and radio ready but not among the band's best material. "Simplicity" has roots in 1970's/1980's AM rock and pop, providing a mildly catchy pre-cursor to the darkly intriguing "Lay Your Weapons Down". Margaret's Daughter sings a song of consolation to a youth who has failed in his question for love on "Charmless Young Man", offering solace even within the reproach. Black Hole Express closes with "Right Beside Me", rumination on love lost and the inability to cope with that loss, particularly when the object of love remains nearby.

Margaret's Daughter gets it done on Black Hole Express with quality songwriting, strong vocals and a refined delivery that highlights their musical talents. Margaret's Daughter never really blows you away, but neither do they fail to deliver solid performances. The nod to distinctive influences creates access points for new fans, but Margaret's Daughter, in the end, really develops their own sound out of their influences and talents rather than relying on recycled sound.

Learn more about Margaret’s Daughter at http://www.margaretsdaughter.com/ or www.myspace.com/mdbandrocks.   Black Hole Express is available as a CD

from Amazon.com.  Digital copies are also available from iTunes.
Posted by Wildy at 5:00 AM